Commonly known as mountain black cherry, rum cherry, cabinet cherry and most often as the wild black cherry. Wild black cherry trees, I always thought were just nuisance trash trees and should be the first trees to be cut down when clearing land. But, I learned recently that these trees have been prized since colonial times for their beautiful wood and the cough syrup made from their inner bark as well as the many delicious items that can be prepared from the fruit.

Black cherry is a medium-sized deciduous tree that regularly grows to 20- to 30-foot high by 15- to 20-foot spread. But, can reach 80- to 100-foot high when conditions are ideal with the current national record being 134 feet tall. Black cherry trees usually grow as single trunk trees with mature trunks averaging 1.5 feet to 3 feet in diameter. They have a pyramidal to conical shape when young becoming roughly oval-shaped when older. The crown becomes dense with draping lower branches and upright upper branches. Bark on young trees is shiny smooth with lateral lines of lenticels and colored reddish brown to olive brown. As the tree ages, the bark changes to a grey-black, irregularly cracked texture like burned potato chips.  Branches are slender with smooth pale green bark when young. The bark turns from bright red to dark reddish-brown as the branches age. The shiny dark-green leaves are 2- to 6 inches long by 1- to 1.5- inches wide. The alternate, oblong, lance-shaped leaves have finely-toothed leaf margins with tiny, rust-colored hairs underneath at their midrib and two small glands at the base of the blade. Twigs are seldom more than an inch long and smell of bitter almond when crushed. The wild black cherry’s white blooms appear as elongated clusters called racemes in April through May and produce fruit in June through July. The round fruit are about the size of an English pea and turn from red to almost black when ripe. Each cherry has a single peppercorn-sized pit or seed. Fall foliage ranges from yellow-green to yellow, red, and orange. Their roots are shallow and fibrous. 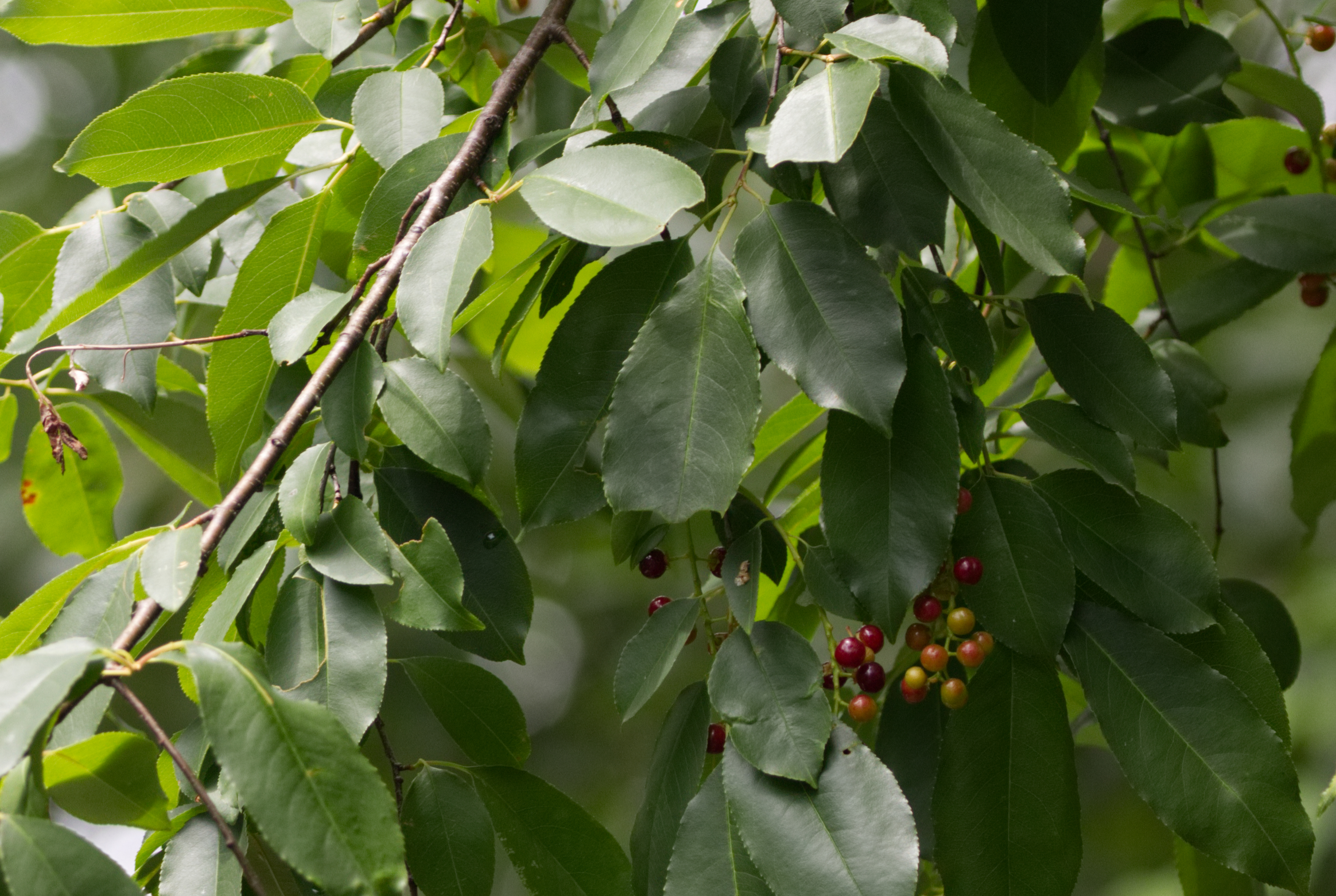 The relatively fast growing wild black cherry will grow in a wide assortment of soil types but, prefers deep, slightly moist, well-drained, fertile, loose soils with a pH of 6.8 to 7.2. They like full sun but, will tolerate light shade. Wild black cherry trees are both highly drought tolerant and moderately salt tolerant. Given ideal conditions, these trees will grow like weeds. They are pioneer trees which means that they are one of the first woody trees to grow in an open field or cleared area. These trees are normally found at the edges of fields, in hedge rows, in open mixed hardwood forests, along bottom lands, and near riverbanks. They cover 4/5 of the US from Zone 3b to Zone 9a growing from central Florida, west to central Texas, north to North Dakota, and east to New England.

As with most young trees, apply one inch of water per week during the first year while they are getting established. Irrigate the tree’s full root zone area when watering. This area extends out twice as wide as the tree’s canopy. Once the black cherry trees are established, they will become drought-tolerant and only require supplemental irrigation when there are periods of extreme drought.

Fertilize young black cherry trees the first year after planting with ¼ pound of 10-10-10 in March and again in June. Once the trees are established, apply 1 pound of 10-10-10 per inch of trunk diameter in early spring and re-apply in June if the leaves begin to yellow. Up to 5 pounds of fertilizer can be broadcast per tree at maturity. Spread the fertilizer evenly away from the trunk to avoid burning it and continue all the way out to the tree’s drip line. Then, gently rake the fertilizer into the soil being careful not to shred the shallow roots.

Black cherries usually grow as a tall, straight, single trunk tree and require less pruning than most fruit trees. The only pruning necessary for the tree’s first six to eight years is removing crossed, broken, or dead branches. Also, the drooping lower branches may have to be trimmed to permit better access around the tree and limit the snow load on the tree. Later in the tree’s life, start thinning out older limbs to allow more sunlight to enter the crown and increase fruit production.

“The bark of the Wild Cherry Tree with lateral lines of lenticels.”

The white flowers open after the leaves are well on their way to expanding unlike the fruiting sweet cherry (Prunus avium) which blooms before the leaves appear. Flies, bees, and flower beetles are responsible for pollinating the flowers naturally. Cross-pollination is necessary to produce viable seeds.

Black cherry is typically reproduced by seed and sprouts from clear-cut trees. Birds, rodents, and other wildlife disperse some seeds across the forest floor while most of the seeds fall in the shadow of the parent tree. A cold treatment can happen naturally through the course of the winter and seed germination will occur in the loose soil and leaf litter. Or a simulated cold treatment called stratification can be given to the seed to simulate winter conditions to break the seed’s dormancy so that germination can take place. This is usually accomplished by wrapping the seed in a wet paper towel and refrigerating them for three months. In a commercial setting, black cherry trees are usually propagated by cuttings or grafts.

In June or July, harvest the many small ripe cherries by spreading a large tarp or sheet on the ground under the tree and then aggressively shaking the tree. Or handpick the fruit when they are dark purple to black. Once the fruit is harvested, store them refrigerated in an airtight glass or plastic container.

Native Americans dried wild black cherries and added them to pemmican, which was a winter survival food. The Appalachian settlers used the bitter-sweet fruit to flavor punch, make wine, distill a liqueur called cherry bounce, and flavor their rum. Thus, the common name, rum cherry. Over the years, the cherries have been used to make many different baked goods such as pies, pancakes, and muffins. They can be cooked down to make sauces for meat and fish. The juice can be strained, and cooked with sugar to make syrup. Apples or pectin can be added to make jelly. Since cooking destroys the poisonous compounds in the fruit, the fruit can be cooked without the tedious job of removing the seeds first. The wood can be used to smoke meats and fish. The wood, branches, and twigs give a strong smoked cherry aroma to the meat. 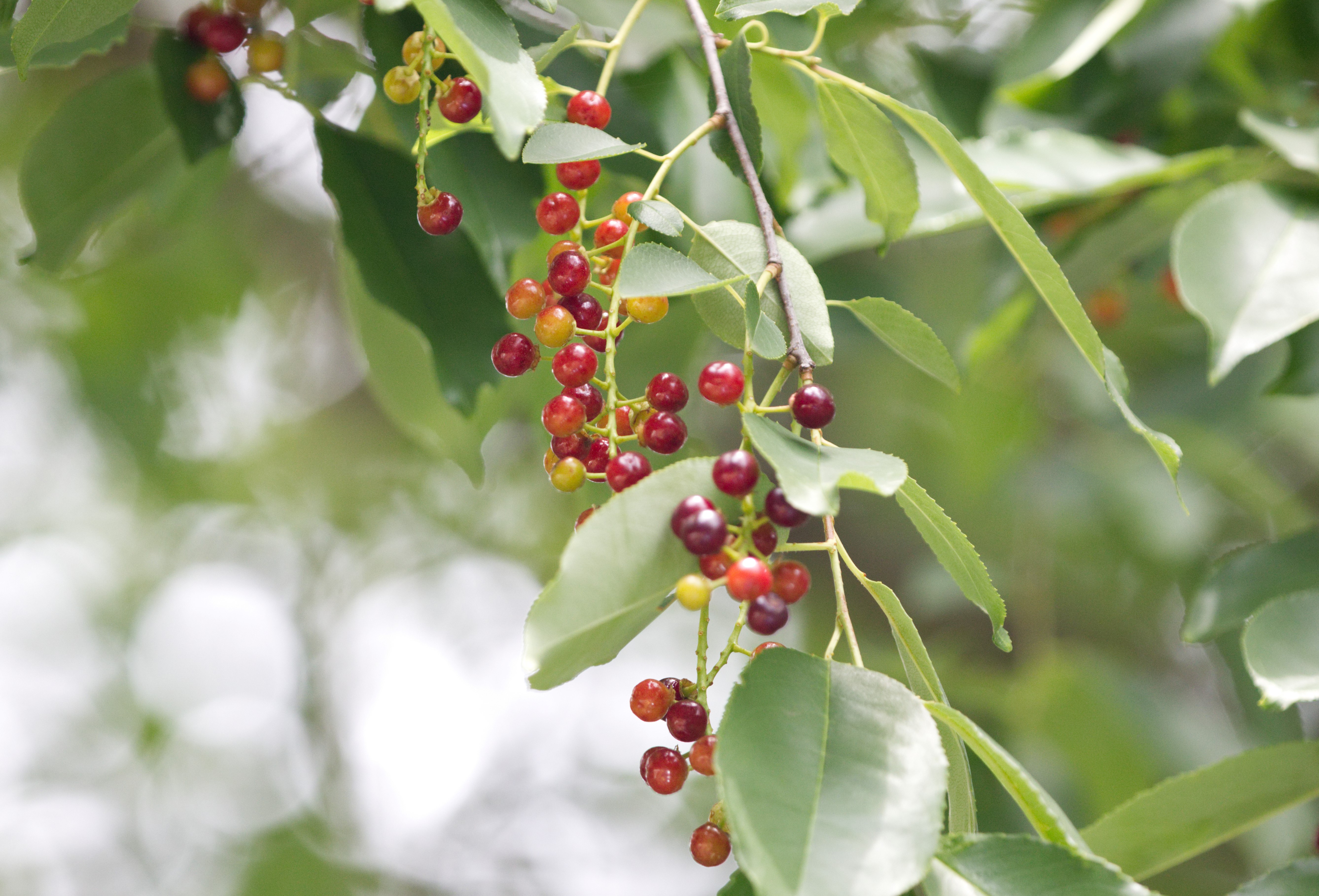 “The small ripening fruit of the Wild Cherry Tree”

Native Americans made a traditional medicine from the wild black cherry’s inner bark that sedated the nerves which cause the cough reflex. This decoction was so popular for the treatment of coughs and sore throats that it was an ingredient in the first commercially made cough syrups. The flavor and red tint, although artificial, is still used in cough preparations even today. A tea made from the powdered inner bark was used as a tonic for headaches, fevers, congested lungs, diarrhea, and sore throats. This tea has a disinfectant quality and once filtered was used as a skin or eye wash.  Poultices of dried, chopped bark were used by several Native American tribes. These poultices were quickly cooked in water and mashed up to a pulp then applied directly to burns, sores, and wounds as an external disinfectant.

The inner bark is best when harvested in the spring and fall when the sugar content in the bark is the highest. Cut the bark into long strips from large side branches to preserve the health of the tree trunk. A strong potion can be prepared by simmering a strip of bark approximately 1 foot in length to 20 parts of water for 2 to 5 hours. This decoction can be turned into to a tincture by adding alcohol or into a syrup by adding sugar.

The fruit of wild black cherry is slightly tart but, is packed with antioxidants such as vitamin C, flavonoids, and carotenoids. These antioxidants can counteract free radicals and repair the damage done by them. The juice is used to treat arthritis, gout, as a sleep aid, for kidney health, and to reduce inflammation in general.

Black cherry is revered for its beautiful wood that rarely splits or warps and can be polished to a high luster. The close-grained wood is used in woodwork for fine furniture, cabinetry, moulding, and as an inexpensive veneer. The wood is also used for making caskets, handles for scientific instruments, and on musical instruments like organs and pianos. Black cherry trees are planted as ornamental landscape plants and as land reclamation plants. These trees are a food source and a mast for many bird species, too.

The weeping ‘Spring Sparkle’ is the only selected cultivar of the wild black cherry but there are four natural geographical variants found in the United States and Canada. Prunus serotina var. serotina, the eastern black cherry is the largest and most prevalent subspecies in eastern North America. The other subspecies are distributed as follows: Alabama black cherry (var. alabamensis) is found in eastern Georgia, west to northeastern Alabama and south to northwestern Florida; escarpment cherry (var. eximia) grows in the Edwards Plateau region of central Texas, and southwestern black cherry (var. rufula) is spread from the mountains of western Texas to central Arizona.

The wilted leaves of wild black cherries pose a poisoning hazard to grazing livestock, especially cattle. Consuming as little as one pound of wilted leaves can kill a large cow. Wilted leaves contain higher levels of amygdalin, a cyanogenic glycoside, which when acted on by enzymes becomes cyanide. It is advisable to remove black cherry trees from pastures land.

The seeds and fruit also carry trace amounts of the cyanide precursor, amygdalin. So, people should limit the quantity of raw berries they eat. Cooking destroys the cyanide so the threat of poisoning is eliminated when the cherries are cooked. Black cherry trees should not be planted near walkways, driveways, and around parking lots. Because of the amount of messy leaf litter, they produce. The cherries can also stain concrete, car exteriors, and roofing. Smashed fruit can also be tracked inside staining carpets and flooring. The small, dried, ball bearing-like pits can pose a slipping hazard. These trees can be an invasive nuisance in the landscape due to their aggressive weedy nature with seedlings coming up here and there in beds.

Although commercially significant as a source of fine wood, these trees are under appreciated as a readily available fruit tree and source of home remedies. Many of the other members of the genus Prunus are well-known fruit trees like peaches, apricots, nectarines and plums. Also, there are so many medicinal uses, as well as, nutritional benefits of this tree that go unrecognized. It is time for the wild black cherry to take its place as an important tree just like its close relative, the sweet cherry, Prunus avium.