The downy serviceberry forms a large, multi-stemmed shrub when left unpruned or a small tree with rounded crown and spreading branches. The small trunks are normally ½ to 1 1/2 inches in diameter with thin, smooth, grey bark. Bark on the older trees has shallow grooves that appear as long dark-grey stripes. They are named downy serviceberry because the underside of the silver-grey leaves is fuzzy when the leaves first emerge in spring. The 1- to 3-inch, simple, alternate leaves are finely toothed and elliptic to obovate with pointy tips when mature. Leafstalks are brown to grey. Leaves turn from dark green in the summer to yellow, orange, and red in fall.

The showy small, slightly fragrant, white flowers appear in 2- to 4-inch long pendulous racemes before the leaves unfurl. They bloom in late March before dogwoods bloom. The fruit of the downy serviceberry is not a berry but is a pome like an apple, to which it is related. The fruit vary in size from ¼ to 1/3 inch. The round fruit start off green, then turn purple-black when ripe. The sweet, juicy fruit ripen in June, thus, the name juneberry. The fruit are similar to blueberries and have a five-pointed, frilled crown on the distal end away from the fruit stalk. The crown is a sign when foraging that the fruit are non-toxic, since no poisonous berries have this crown. Fruit are borne on long stalks in clusters like the flowers, and the sweet cranberry-blueberry flavored pulp surrounds a group of 3 to 10 soft, red, tear-shaped, almond-flavored seeds. 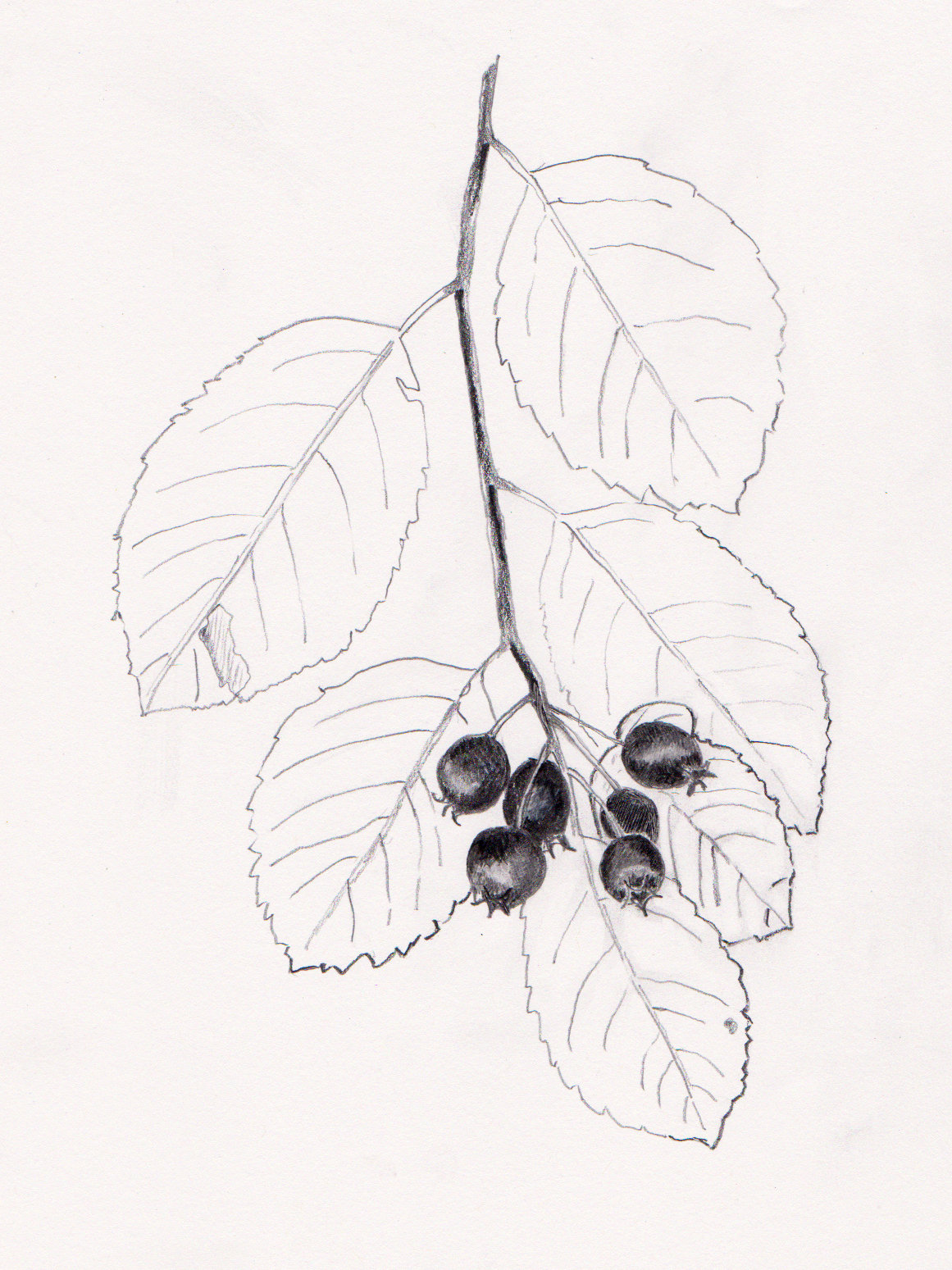 These native trees range from the Florida panhandle, northward to eastern Canada, on westward to Nebraska, and southward to Texas. Downy serviceberries can be found near bodies of fresh water, on exposed hillsides, and in open woodlands. They are hardy in USDA zones 4 through 8.

Juneberries are easily cultivated and maintained when planted in the ground. Choose a location where there is good air flow to avoid late spring frosts that may damage the flower buds, thus reducing the berry crop. They prefer moist, well-drained, semi-acidic soils with a pH of 5.5 to 7.  They will tolerate many soil types, especially when kept well-drained.  It is particularly important to provide weed control the first 3 years so the young trees can get established without any competition. Once established, they will tolerate weeds, seasonal flooding, and will be moderately drought tolerant. But they will always be intolerant to soil compaction and pollution. A serviceberry does best in full sun but will tolerate partial shade. 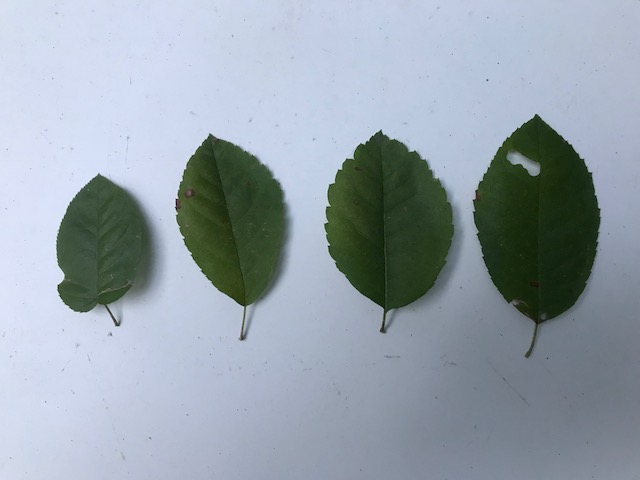 During the first year, while the young trees are getting established, give them 1 inch of water per week, but no nitrogen fertilizer is needed. Once established, the trees will only need supplemental irrigation during times of severe drought, and fertilizer isn’t necessary unless a soil test exhibits a need. When planted in good soil, yearly applications of compost should be sufficient fertilization. But if need arises, apply a low-analysis nitrogen fertilizer such as fish emulsion, alfalfa meal, or blood meal in early spring.

Amelanchier arborea typically grow as an 18- to 25-foot multi-trunk shrub or small tree that commonly produces many root suckers. But by repeatedly removing these suckers and low branches, the plants can be trained to grow as a single trunk tree. The standard form is the preferred one used by orchards and nurseries since a single trunk provides the plant with a stronger structure. It is also best to maintain a height of 6 to 9 feet for easier harvesting and application of protective bird netting. Other than pruning the root suckers and trimming for a more desirable height, thinning for a more open center is recommended. This is done to allow more sunlight and air circulation to the center of the plant to prevent fungal and bacterial diseases. Remedial pruning to remove crossed, diseased, damaged, or weak branches is also necessary. Pruning is best done in early spring after the threat of freezing weather has passed and before the plants are actively growing. Generally, once the size and form of the tree is set, these plants require little or no pruning.

Downy serviceberry is partially self-fertile and does not require a pollinizer for fruit set, but will produce a far larger berry crop if supplemental pollination is provided by a different clone with an overlapping bloom time. Co-pollinating plants need to be within 50 to 75 feet of one another for desirable cross-pollination to occur. Bees, bumble bees, and other foraging insects are responsible pollinators.

There are several methods of propagation that can be used to multiply these plants including dividing root suckers, softwood cuttings, tissue culture, seed propagation, and root divisions. Root suckers can be easily separated from the parent plants during the dormant season and transplanted into pots or rooting beds of loamy soil. Another simple method of propagation is taking softwood cuttings 3 to 6 inches long in late spring or early summer. Dip these cuttings in a rooting hormone, and stick them in a rooting media that is bottom heated and under mist. The limitation of softwood cuttings is the large number of stock plants required to produce a considerable amount of rooted cuttings. In tissue culture, only one bud or shoot tip is needed to create large numbers of new plantlets. But tissue culture is an expensive form of propagation due to all the specialized equipment and expertise necessary. Where as seeds are easy to harvest from the fruit, and it only takes a few stock plants to produce many new seedlings. The drawback to seed propagation is genetic variability, meaning the progeny’s characteristics can vary widely, and undesirable characteristics may not become apparent for years. Harvesting suckers or rooted divisions from the parent plants is probably the easiest and best way to preserve the genetic characteristics of the parent plants.

Juneberries are exceptionally resistant to many pests and diseases when well kept. But like their relative, apples, juneberries can be susceptible to numerous pests and diseases when not well-fed or grown in appropriate conditions. Rusts such as cedar-apple rust can cause defoliation and fruit drop. So it is best to reduce the number of alternate rust hosts like junipers and cypresses nearby. The bacterium that causes fire blight can also affect juneberries, as well as many other members of the Rose family. Fire blight can be kept in check by pruning out the diseased branches and then spraying with an agricultural-grade streptomycin.  Other diseases that can attack juneberries are powdery mildew, witches broom, leaf spot, and black sooty mold. The pests troubling juneberries are borers, leaf miners, cambium miners, Japanese beetles, aphids, red spider mites, thrips, pear leaf blister mites, pear slug sawflies, and willow scruffy scale. But birds can be the most damaging to a crop of juneberries.

It usually takes 3 to 4 years before an Amelanchier starts to produce fruit and 7 to 8 years before producing large crops. Depending on the plant’s age and that year’s weather, yields can go up to over 17 pounds per year per tree. The juneberries ripen in late spring over the course of several weeks. Picking juneberries can be done by hand, or just like when harvesting mulberries, you can lay down an old sheet or tarp, then shake the tree gently. Because of their short shelf life, the fruit should be cleaned, sorted, and cooled as quickly as possible. When fully ripe, juneberries are fragile and easily damaged. So, use a shallow box or basket to harvest the berries, and don’t layer them too deeply. Like other berries, the fruit can be preserved frozen, dried, or pickled in vinegar.

Juneberries are commonly eaten fresh since they have an irresistible juicy, sweet cranberry-blueberry flavor. The seeds also have mild nutty, almond-like flavor. The fruit also lend themselves well to making jams and jellies due to their high pectin content. Juneberries are also ideal baked in pies, tarts, muffins, and breads or cooked in pancakes and puddings. They are especially good when combined with strawberries. The juice can be used to make wines and syrups. They are delicious when dried like raisins. Juneberries also make great ice cream and sorbet.

Native Americans used dried juneberries mixed with fat and powdered meats to make their winter food staple, pemmican. Small cakes were made from cornmeal and added to stews. A juneberry tea was also made to aid digestion and to rid children of parasitic intestinal worms.

These nutrient-dense, berry-like pomes with only 94 calories per cup are a good source of vitamin A, vitamin E, iron, calcium, and protein. They are higher in antioxidants than the plant pigments anthocyanin and quercetin, and contain more vitamin C than wild blueberries. They are also rich in fiber, with one cup containing 16% of the daily requirement. In addition, juneberries have trace amounts of many of the B vitamins like folate, biotin (B7), thiamine (B1), riboflavin (B2), pantothenic acid (B5), as well as resveratrol. All of these nutrients work in concert to help reduce inflammation in joints, slow aging, prevent memory loss, and protect eyesight.

Other than as a food source, the Native Americans used serviceberry tree twigs to make cordage for basket weaving and as straight wood for arrow shafts. Also, because of its strong close-grain wood, it was used for tool handles, combs, fire drills, and digging sticks. The wildlife value of the downy serviceberry is as a nectar source for bees and butterflies. Birds and other wildlife also love to forage on the berries. But the greatest value of these plants is as an ornamental landscape plant with their early lacey white blooms, attractive purple-blue berries, and outstanding fall foliage. Because of their small size, they can be used as a medium-height hedge underneath power lines, along residential streets, or in parking lots. They can also be used as a specimen plant or in containers. The Amelanchier arborea is also commonly used as a rootstock for other pome fruits such as apples and pears.

There are not currently any named cultivars of Amelanchier arborea. But there are numerous selected varieties of other Amelanchier species. The following are some of the most popular varieties: 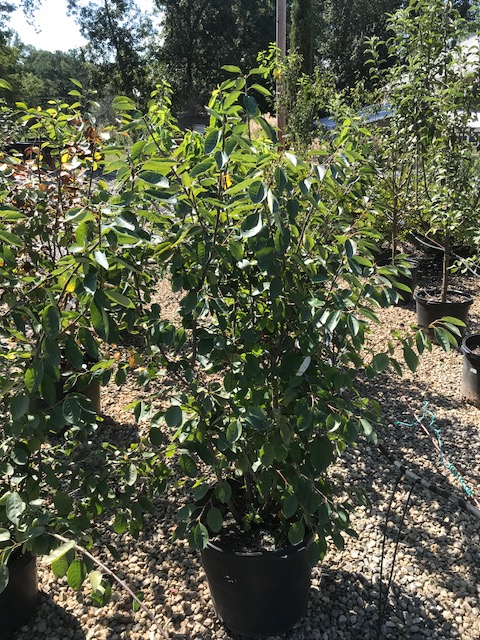 An example of a 15 gallon Serviceberry ‘Autumn Brilliance’

Amelanchier leaves, flower buds and twigs contain prunasin, a precursor to hydrogen cyanide. If these plants parts are consumed in large enough quantities, it has the potential to be fatal to cattle. So, it is recommended to clear pasture areas of any Amelanchiers. But there are no other poisonous look-alike plants to worry about when foraging for berries.

There is considerable potential for the commercial production of juneberries, Amelanchier arborea, in the Southeast. Saskatoon berries, Amelanchier alnifolia, have been commercially grown for decades in both the Pacific Northwest and Canada. The time is right for juneberries to also be successfully produced in the Southeast with the current demand for this unique fruit among professional chefs and home cooks alike.

There are a limited number of retail nurseries carrying juneberry starter plants: