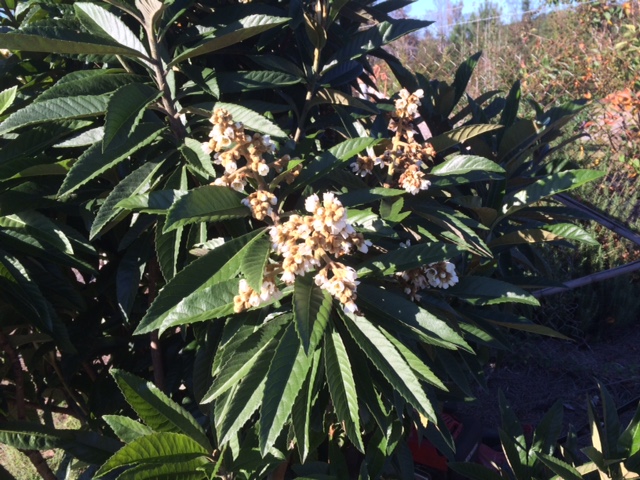 A loquat tree in bloom this fall. 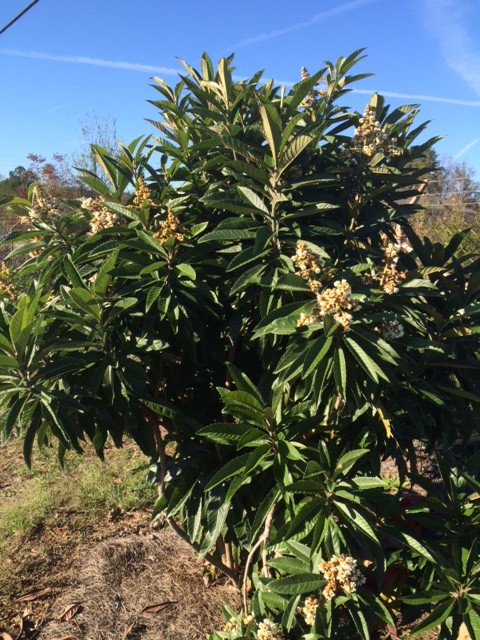 A loquat tree that has been pruned for easier fruit harvesting. 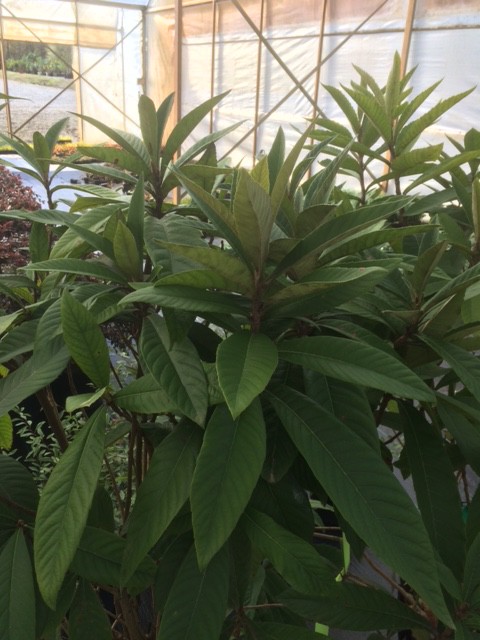 A close-up of loquat foliage.

I try to stay at a hotel in Valdosta, Georgia each January that has a heavy landscape planting of dozens of loquat trees in order to eat the many ripe fruit. No one else in the area seems to know that the abundant small yellow-orange fruit are edible so I have them all to myself. The hotel staff has gotten used to my foraging visits, but they still must think I’m quite odd climbing in their trees to harvest bags full of the delicious fruit.

The loquat originated in the cool hilly regions of southeastern China where the fruit were solely reserved for royalty. They were brought to Japan about 700 A.D. Japan is now the largest commercial producer of loquats in the world. These unique fruit trees were mentioned in western literature as early as 1690 and were first imported from Canton, China to Kew Gardens in London in 1787. Chinese immigrants brought loquats to California and Hawaii in the early 19th century. The loquat is a member of the rose family, Rosaceae, and is known by many names including Chinese plum, Japanese medlar, biwa, pipa and nispero.

An attractive small sub-tropical tree, the loquat can reach 30 feet in height with a 10- to 20-foot spread. It has a short trunk and a rounded spreading crown similar to that of a magnolia tree, but with large tropical-looking evergreen foliage on wooly twigs. The corrugated obovate-lanceolate leaves are 5 to 12 inches long and 3 to 4 inches wide, glossy dark green on the upper side and downy white or gold underneath. The small, sweetly fragrant, creamy white flowers are borne in rust-colored hairy clusters. The loquat blooms in the fall, and 90 days later, the fruit ripens in winter. The yellow-orange fruit are 1 to 2 inches in diameter and form in dense clusters. Fruit can be oblong, spherical, or pear-shaped and white to yellow fleshed, depending on the variety. The chewy succulent pulp of the loquat fruit can vary from sweet to semi-acidic. Each fruit can have up to 10 large black-brown seeds, but usually average 3 to 5 seeds.

The low maintenance loquat is an easy plant to grow. It prefers full sun to partial shade and adapts well to most well-drained soils with a pH of 5.5 to 6.5 that has modest fertility. Loquats do not tolerate standing water well. These trees can survive in Zones 7 to 10, but they will only produce mature fruit where the winter temperatures stay above 27 degrees F. Therefore, loquats are used only as an ornamental landscape plant in Zone 7. They are wind tolerant and drought tolerant but need regular watering when young or while fruiting.

It is best to plant loquats in the fall, but anytime is fine. Young loquats can be slow to root, so stake them for the first two years. They are also sensitive to competition from weeds so prepare a 3 inch deep mulched weed-free zone of 2 to 3 feet around each tree. Be careful when cultivating near a loquat since they are shallow rooted. Loquats also need plenty of space to grow so plant them no closer than 25 to 30 feet from the next closest tree, structures, or above ground power lines. Also, do not plant these trees near swimming pools or outdoor living spaces since they drop lots of ripe fruit which attracts bees and wasps.

Fertilize with a 6-6-6 NPK fertilizer, or use well composted manure, three times per year when the tree is actively growing. If growing in sandy soil, use a slow release 14-14-14 NPK fertilizer once a year in addition to your other fertilizer applications. Be careful not to over-fertilize since it can reduce flowering thus reduce fruiting and make the plants more susceptible to fire blight.

Loquats usually only require remedial pruning such as pruning out dead, diseased, or crossed limbs. They will tolerate hard pruning, so it is possible to prune to adjust height and spread. This type of pruning is often done by commercial loquat growers for ease of picking and thinning. Loquats have a tendency to bear in alternate years; in order to prevent this, prune after harvest each year.

Loquats can be either self-fertile or require cross-pollination. Whether your trees are self-fruitful or needing a pollinator, it is still a good idea to plant at least two varieties to ensure a good harvest. Loquats are pollinated by bees.

Loquats can be propagated by numerous methods including seed, grafting, air-layering and, softwood cuttings. Seedlings are usually too variable for good fruit production and are instead used as grafting rootstocks or as ornamentals. Softwood cuttings are a common propagation method and are normally taken in spring using bottom heat to accelerate their rooting. Various grafting methods can also be employed such as shield-budding, side-veneer grafting, and cleft-grafting. Commercial growers use pyracantha or quince rootstocks to form a dwarfed tree for easier picking and earlier bearing. Grafted trees usually bear fruit within 2 to 3 years, whereas seedlings take up to 8 to 10 years.

Loquats are relatively pest-free, but they can be affected by several pests including Caribbean fruit flies, aphids, caterpillars, scales, and Codling moths. Most of these pests can be readily managed by better sanitation of old fruit beneath the tree and spraying dormant oil or Bacillus thuringiensis (Bt). Birds can also be a nuisance pecking the fruit, but netting around the tree or cheesecloth bags over the ripening fruit can solve this problem. The cheesecloth bags can also be used to alleviate any sun scald problems. Fire blight and pear blight can be disease problems, but these can be remedied by carefully pruning out infected limbs and by spraying an agricultural form of streptomycin.

Loquats are easily bruised, do not keep well, and are labor intensive to harvest, so they have not been attractive to most commercial growers. However, these factors shouldn’t deter the home orchardist.

The fruit are ripe once they turn a distinctive deep yellowish-orange. Be careful to make sure the fruit are ripe before harvesting since they won’t continue to ripen once picked, and unripe fruit are highly acidic and tart. The fruit can be simply gathered by loping off whole clusters of fruit and then using a knife or pruners to cut off individual fruit. Eat the fruit only after being peeled and seeded. The seeds, and to some extent the skin, of the fruit contain a common plant toxin, amygdalin, which can be poisonous if consumed in large quantities. Because these fruit only last a few days before spoiling, it is a good idea to freeze a portion of your crop.

The soft and juicy fruit of the loquat can be eaten fresh or stewed in sweet syrup. Fruit can be made into jams or jellies and used as pie-fillings. They can also be substituted in many recipes calling for apples or peaches. Fermented fruit can be used to make wines and liqueurs.

Loquats are rich in vitamins A and C, as well as the minerals potassium and magnesium. These fruit also have a high pectin and sugar content, yet they are low in dietary fats and sodium. In Chinese herbal medicine, syrup made from loquat leaves is used as an expectorant, cough soother, anti-diarrheal, and as an anti-nausea medication. Japanese herbalists make a beverage from dried loquat leaves used to heal bronchitis, other respiratory maladies, and inflammatory skin conditions such as psoriasis. Loquat fruit is also said to act as a gentle sedative, if eaten in quantity, lasting up to 24 hours in some people.

Loquats make an excellent ornamental landscape screen, specimen, or espalier. The dense pink wood is used to make rulers and other drawing instruments. The young branches can also be used as livestock fodder.

There are over 800 named loquat varieties worldwide but only about 40 are used in the United States with any regularity. The following are some of the best varieties commonly grown:

‘Advance’ – The natural dwarf with medium to large juicy pear-shaped yellow fruit with white flesh is a good pollinator.

‘Big Jim’ – The 15 foot tree, with large to very large pear-shaped fruit has orange-yellow flesh and is cold hardy down to 12 degrees F.  It is partially self-fertile but would benefit from cross-pollination.

‘Champagne’ – A white-fleshed variety with elongated pear-shaped to oval deep-yellow fruit with an excellent sweet to mildly sub-acid flavor. It is self-fertile.

‘Gold Nugget’ (aka ‘Thales’) – A tough variety with medium to large round yellow-orange fruit has orange-colored, juicy flesh. It is self-fertile.

‘Oliver’– The medium to large-sized orange fruit has pale orange flesh. This variety is considered to be the best loquat for southern Florida. It is a cross between ‘Tanaka’ and ‘Olivier’ and requires cross-pollination.

‘Tanaka’ – The cold hardiest variety and the choice of many commercial growers, it has very large round orange to yellow-orange fruit with orange flesh. It has excellent flavor and is partially self-fertile, but it will produce better with cross-pollination.

‘Wolfe’ – The 25 foot tall tree has large yellow fruit with orange flesh. It has round to slightly pear-shaped fruit with firm tasty flesh. It requires cross-pollination.

I had a loquat in my yard in north Georgia for 12 years. It never produced fruit and the severe winter of 2013 killed it.  I am replacing it with two loquats next spring because I think they are such attractive landscape trees, and in my area that is the only choice. I guess I will have to continue going to Valdosta for my loquat fruit fix.