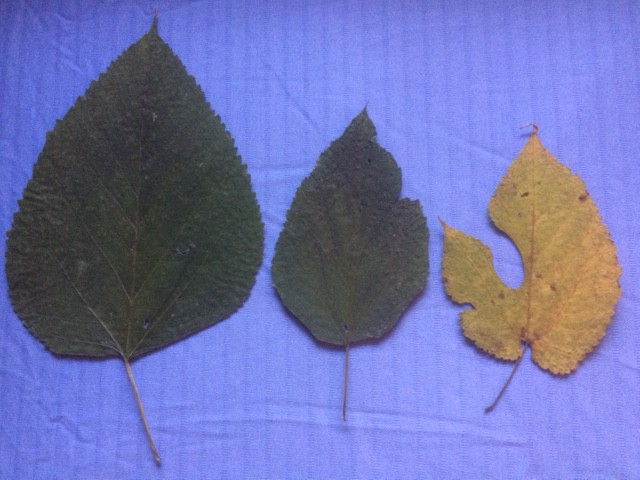 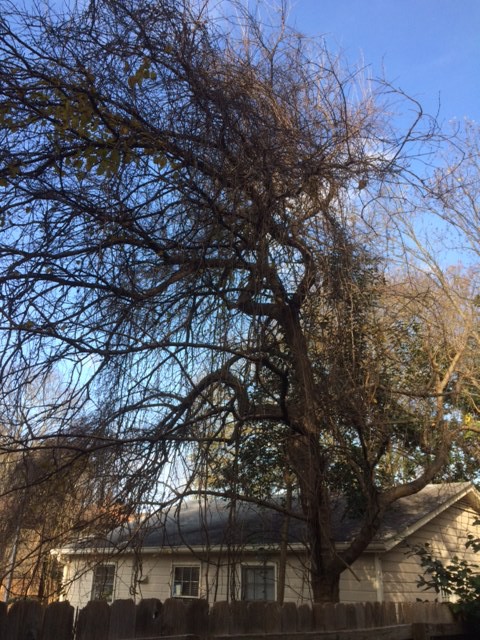 The mulberry was considered to be the “king of tree crops” in the 18th and 19th centuries, but with the advent of commercial truck farming, it fell out of favor since the berries are soft and do not travel or store well. There are 16 varieties of mulberries, but only three are economically important: the red mulberry (Morus rubra), the white mulberry (Morus alba), and the black mulberry (Morus nigra). Only the red mulberry is a native to North America and has been used as a food source by Native Americans for centuries. The white mulberry was brought here from eastern and central China in the early 1700’s to start the silk trade, the black mulberry was imported to America from western China for fruit production.

The red mulberry is an attractive fast growing deciduous tree 40’ to 70’ tall with a range from the Gulf Coast northward to Kansas and eastward to Massachusetts. These trees are found in areas of rich soil in the open woods or along fencerows. They are short-lived trees, rarely lasting more than 75 years and are hardy to sub-zero temperatures (Zone 5 to 9).  Some clones have survived as low as -25 degrees F. Their 3” to 6” leaves are larger and thicker than the other two main species. Red mulberry leaves are dark green with fine-toothed margins, rough on top and pubescent underneath with an overall sandpaper texture. The leaves vary in shape from heart-shaped to mitten-shaped or sometimes can be three-lobed. The leafstalks, twigs, branches, and roots bleed a milky sap when cut. The thin rough bark is reddish-brown with smooth ridges. The insignificant flowers of the red mulberry appear in June and July. Both male and female catkins can be present on the same tree. The fruit of the red mulberry looks like elongated one inch blackberries that vary when ripe from deep red to nearly black. The plentiful berries have a good mixture of sweetness and tartness. The fruit is usually ready to harvest in June and July.

The white mulberry is a weedy, large, short-lived tree that grows up to 80’ tall. This species of mulberry was brought to North America in the early 18th century in order to feed silkworm larvae for the silk industry. The white mulberry is now considered an invasive species by a number of states. They are the most cold-hardy (Zone 4 to 8) of the three predominant species with many ranging across the northern United States. The leaves are light green, variously lobed, hairless, and leaf-out two months earlier than the black mulberry. White mulberries are so named for the flower bud color, not the fruit color. The berries usually ripen in late spring and vary in color from lavender-black to white. The flavor is bland since they have little tartness to off-set their extreme sweetness. The bark is rough, flaky yellow-brown with vertical cracks and furrows.

The black mulberry is the smallest of the three trees and tends to be a large neat shrub at up to 30’ in height. They take well to container culture and can live for hundreds of years. These mulberries are the least cold-hardy preferring a Zone 6 climate or warmer. They range from Virginia to Washington and are the most popular along the Pacific Coast. The leaves are like the red mulberry but the twigs are tougher and the buds are fatter. The fruit are large and juicy with a good balance of sweetness and tartness, and are the best tasting of the three main species. The fruit ripen in late summer and are difficult to pick because the berries are so soft.

There are many white and red mulberry hybrids (M. alba x M. rubra) scattered across the countryside. These hybrids have variable fruit color and flavor but all ripen in late spring.

All three primary mulberry species perform best when planted in full sun to partial shade where they are protected from the wind since they have weak branches.  They tolerate a wide range of soils, but prefer a fertile, deep, loamy, well-drained soil with a pH of 5.5 to 7. Mulberries don’t do well in shallow, rocky soil, or near a compacted roadway. When you plant, give them plenty of space, and allow for a minimum 15 foot spread. They establish best when planted while still dormant in early spring. Both bare root and container grown trees seem to grow off well. It is wise to not plant these prolific trees near sidewalks or patios since the fruit will stain the pavement and can be tracked indoors or into your car.

Although these trees are fast growing, they can take up to 5 years before starting to produce a heavy fruit crop. All the species of mulberries are somewhat drought-tolerant, but dry weather during fruiting can cause the berries to drop before fully ripening. It is advisable to give young trees extra water during dry periods the first 3 to 4 years until they are well established, as well as mature trees that are fruiting.

These trees tend to thrive with minimal fertilization. Usually, a yearly application of organic compost or 10-10-10 NPK fertilizer will maintain satisfactory growth. Try to limit pruning to when the tree is fully dormant, otherwise, sap will bleed extensively from the wounds, and don’t prune any limbs larger than 2 inches in diameter since those wounds usually won’t heal. Remove limbs that are below the main framework of the tree and shape up the overall form of young trees.  Espaliers, half-standards, and standards can be made with young trees. On mature trees, only prune out dead, broken, or crossing branches. In a commercial production setting, prune the lateral limbs to six leaves length to develop more fruiting spurs near the main branches.

Mulberries are self-fruitful with both male and female flowers usually on the same tree. These trees are pollinated by wind, and they do not require cross-pollination, but it may provide for a heavier berry crop.

Mulberries can be propagated by a number of different methods such as by seed, hardwood cuttings, air layering, and softwood cuttings. But the most common method is spring bud grafting. Seeds will germinate in 9 to 14 days, but the tree will take up to 10 years or more to produce fruit. So, propagation by seed is seen as being far too slow.

Mature mulberries seldom have issues with diseases or pests but they can get a bacterial canker. Mulberry canker can be held in check by removing the diseased branches a foot below the infected area while sterilizing your saw or pruners with a 10% alcohol solution between cuts. Potential pests are scales, whiteflies, mealybugs and webworms. These common pests can usually be controlled by timely applications of horticultural soaps and oils or a simple strong blast of water.

Red, white, and red/white hybrid mulberries ripen in late spring and can be shaken off the tree. The easiest way to harvest them is to spread a clean tarp or sheet beneath the tree. Have someone climb into the tree and give it a hardy shake in order to harvest gallons of berries.

While black mulberries are ready to harvest in summer or late summer and must be pulled off the tree by hand. The fruit of all the species mature over several weeks. Use latex or nitrile gloves to protect your hands from being stained while harvesting the berries. Also, be careful not to stain your clothes.

Use the berries as quickly as possible since they will only store for a couple of days in the refrigerator before they start to mold or ferment. This short shelf life is due to the mulberries thin skins and high water content. The berries can be eaten fresh, frozen, dried, or cooked in a multitude of recipes.

Mulberries can be made into puddings, sauces, pies, cakes, candies, ice cream, jams, and syrups. They make especially good smoothies since their flavor blends well with other fruit such as pears and apples. The berries can also be dried to a crunchy consistency like figs.

The young leaves and twigs of the mulberry tree can also be boiled and used as a cooked vegetable. The twigs and unopened leaves are especially sweet in early spring.

Mulberry leaves are used to feed silkworms for the silk industry, as well as, to fatten up livestock, especially poultry and hogs. However, there are many other uses for the mulberry tree other than as a food source. The wood is soft but durable and is used for furniture, fence posts, paneling, sporting goods, toys, smoking meats, and as firewood. The bark is used to make paper in Europe and the twigs are used to make baskets. The fruit are used as a natural dye for cloth and as a food color extract. Mulberry varieties are also used in ornamental landscape as background plants, screens, and as specimen plants.

Mulberries have been used medicinally by Native Americans for hundreds of years. Infusions of the root bark were used as a remedy for tapeworm, overall weakness, urinary problems, and as a purgative. These tribes also used tree sap applied topically to heal ringworm. Various parts of the mulberry were also used in Ayurvedic medicine. The leaves were used in a gargle for throat infections. The leaves and the juice of the roots were used in a tea to control high blood pressure. The fruit were also used to control fever, sore throat and depression. Health benefits of mulberries currently accepted include their ability to lower cholesterol, bolster the immune system, lower blood pressure, and enhance the overall metabolism of the body. They are also thought to prevent some cancers, improve digestive health, enhance the body’s production of red blood cells, and decelerate the aging process. Mulberry fruit are extremely nutritious. They are rich in many vitamins and minerals including vitamins A, C, K, E and B complex as well as minerals such as iron, calcium, potassium, phosphorus, copper, and magnesium. The leaves alone contain 18 amino acids and the fruit also contain many beneficial organic compounds such as resveratrol, antioxidants including anthocyanin, lutein, beta carotene and a carotenoid called zea-xanthin.

Although, the native red mulberry (M. rubra) is the most common red mulberry in production there are several cultivars that are worth mentioning such as ‘Geraldi Dwarf’, a compact 6 foot tree with large black fruit, and ‘Red Gelato’. The white mulberry varieties that are worth noting are ‘Pakistan’, ‘Whitney’ and ‘Shangri-La’ which does well in warmer climates like Florida. ‘Illinois Ever Bearing’ and ‘Collier’ are the recommended varieties of the red/white hybrids. Good performing varieties of black mulberries (M. nigra) are ‘Black Beauty’, ‘King James’ (aka ‘Chelsea’) which has large juicy dark red fruit, ‘Black Persian’, and ‘Superberry’.

The mulberry tree is one of the few fruit trees that will produce enough fruit to satisfy both the local wildlife and the grower. The mulberry tree will make an exceptional addition to your food forest or backyard orchard.

Mulberries are very efficient at lowering blood sugar levels which is good for diabetics but can be dangerous for hypoglycemics. Also, uncooked leaves and green berries are hallucinogenic.