While traveling one March day in Tennessee between Knoxville and Maryville, I was amazed by the dozens of redbuds in bloom along both sides of Hwy 140. They formed a tunnel of gossamer lavender-pink blooms encasing the roadway. For years, I had thought redbuds were just another one of the first trees to bloom in early spring like dogwood or serviceberry, I didn’t realize that it was such an important tree to Native Americans and settlers who considered it an integral source of food and medicinals. 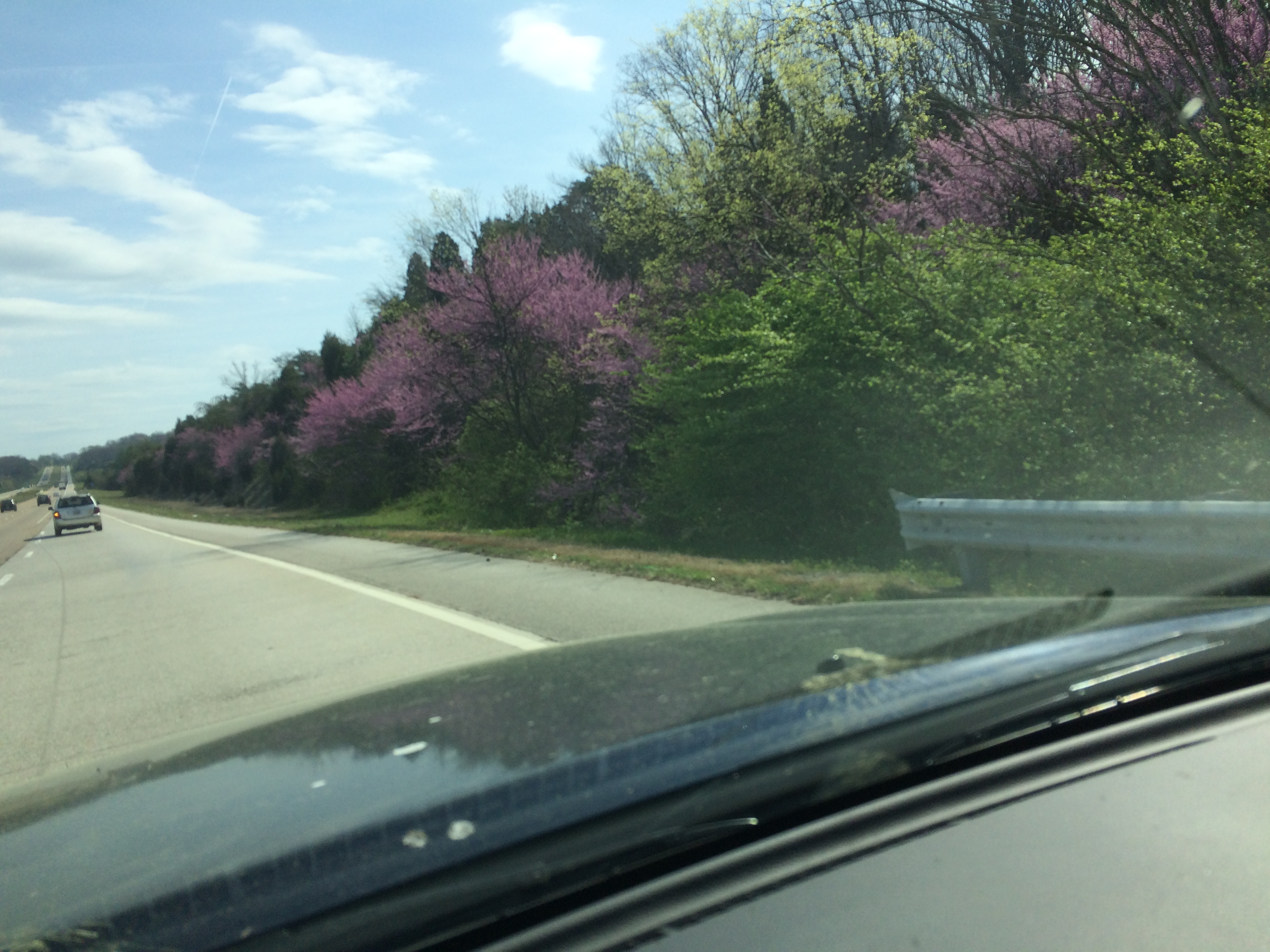 Redbuds along the HWY 140 near Maryville, TN

Although it does not fix nitrogen in the soil, it is a legume and in the Fabaceae family with peanuts and beans. The eastern redbud is a small- to medium-size native, deciduous tree usually growing 20- to 30- feet tall with a 25- to 30-foot spread, but they can grow larger. The current champion tree is 40 feet in height with a 3-foot caliper trunk. Redbuds start out as wispy saplings and become vase shaped with many having divided trunks as they age.  Mature trees normally have rounded or flat-topped crowns.

The leaves are glossy, dark green and heart shaped (cordate) with pointed tips and smooth edges. Usually 2- to 6-inches long and 3- to 5-inches wide with radial veins running across a smooth texture on top. The leaves are sometimes slightly hairy underneath. The simple leaves are held in an alternate pattern. They are reddish purple when first emerging in spring and then turning an attractive shiny dark green when fully expanded. In autumn, they turn a rather dull yellow. Leaf petioles are commonly 1 ½-to 2 ½-inches long.

Twigs and branches are slender with pointed tips and form a spreading zig-zag pattern. On mature trees, the limbs usually don’t start till 6 feet up the tree. The small ¼- to ½-inch pea-shaped flowers are fragrant and purplish pink. They appear in clusters in late winter or early spring before the leaves appear. They form on branches of the previous or earlier years growth and even on the mature tree trunk. The rough brown trunk usually has character and looks older than it is. The trunks on most redbuds are single and are less than 12” in diameter. Redbuds develop a course root system with a deep taproot which make them difficult to transplant when established.

The fruit of the redbud is a flattened pink-green true pod which appears in early summer, turns green during summer, and then brown in the fall. The brown seed pods will sometime persist till the next spring. The pods look like butterbean pods and are 2 to 3 inches in length by ¼ to ½ inch wide. The redbud pods mature in late summer and contain 4 to 10, hard, brown to black seeds. 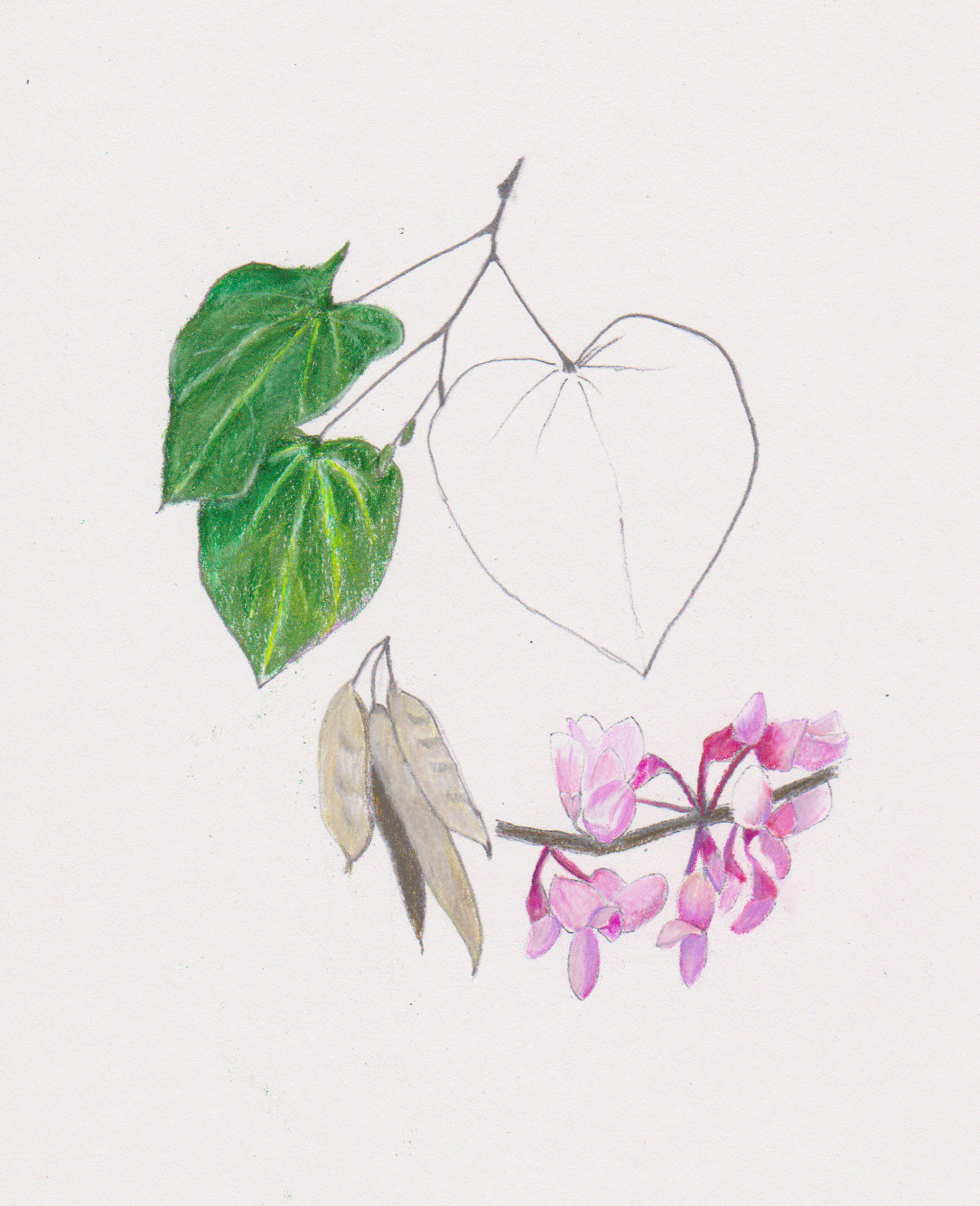 Illustration of a Redbud (illustrated by Karen M. Johnson)

Redbuds can be found along roadsides, at the edges of forests, in ravines, on riversides, in bottomlands, and on the sunny edges of fields. They will grow just about anywhere there is full sun to dappled shade in Zone 4 to 9. They range widely from northern Florida northward to New Jersey, westward to southern Wisconsin, and southward to Texas and northern Mexico. This medium to fast growing tree will adapt to a wide range of soil types and pH levels from very acid to very alkaline.  But, it prefers well-drained, deep, sandy loam with a pH of 7.5 or above. It dislikes constantly wet soils, especially compacted clay soils. But, it can tolerate short-term flooding. At the other end of the spectrum, it dislikes coarse sandy soils and drought conditions. An ideal location for a redbud would be on a sunny south-facing slope at the edge of a wooded area. Redbuds will bloom more profusely in sunny locations. 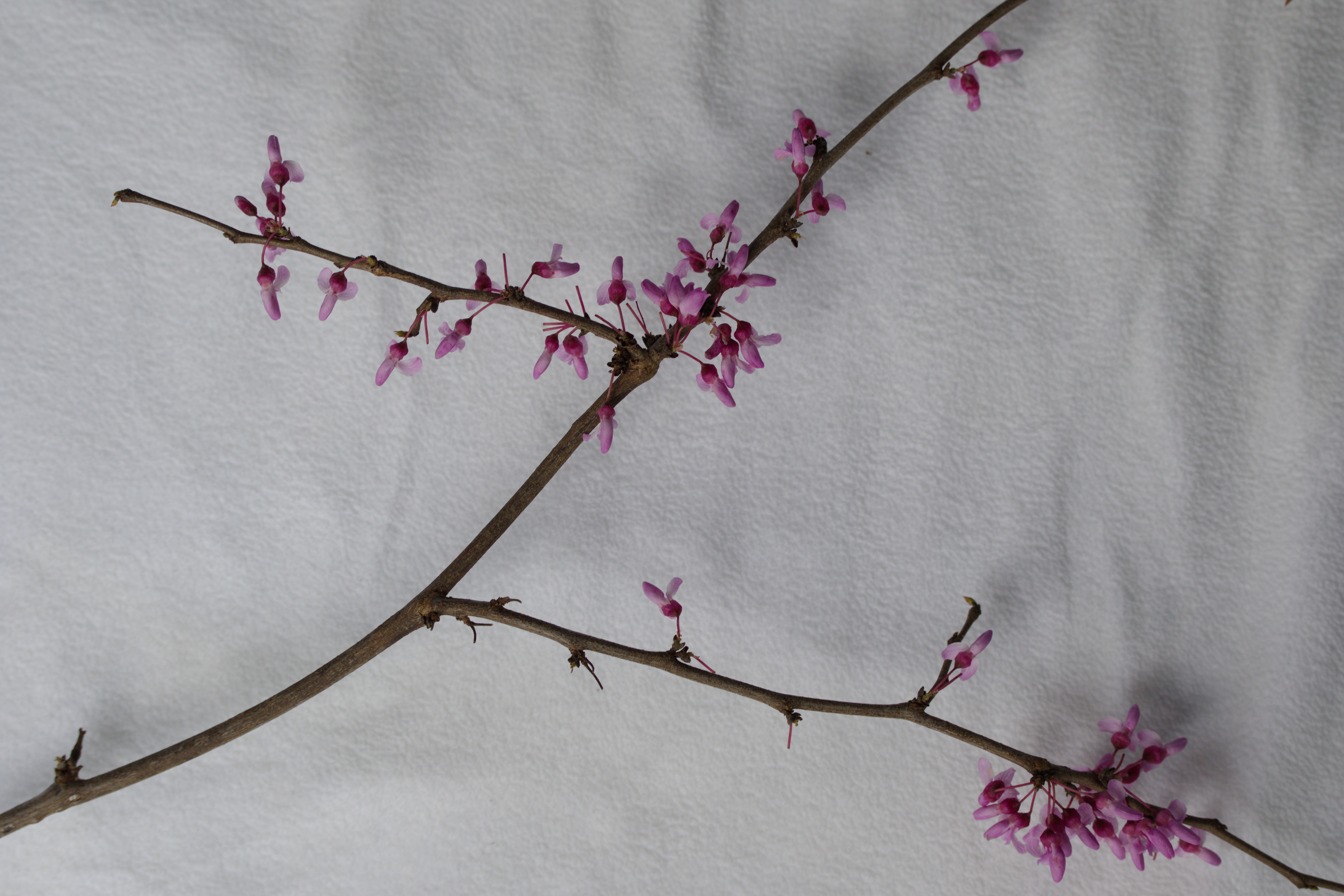 An Eastern Redbud limb with flowers in several stages of bloom

It is best to plant a redbud during the cooler rainy spring months to lessen transplant shock. After planting, water your redbud tree weekly for the first month and then reduce watering to every other week. Once the tree is established, it will only need watering during the dry periods of summer. They do not like extended periods of drought or wet feet.

Fertilize your trees at six-week intervals starting from mid-March to June with a good complete analysis shrub fertilizer such as a 10-10-10. Spread one application of a slow-release fertilizer such as 24-8-10 around the tree 10” from the trunk out to the drip line in early March.

A uniform rounded crown and a strong structure can be maintained with judicious pruning. Redbuds are prone to throwing a few dead limbs that will become apparent each spring. Prune out any dead or diseased branches and dispose of the cuttings. Redbuds are low-branched and have limbs that tend to droop so, pruning may be necessary for pedestrian or vehicular clearance. These trees want to grow with split trunks but can be trained to grow with a single trunk for a stronger structure.

The flowers of the redbud are hermaphrodite meaning they contain the reproductive parts of both sexes so they are self-pollinating. Redbuds are most commonly pollinated by bees.

Redbuds can be propagated by seed, softwood cuttings, or by simply relocating self-seeded seedlings. When propagating by seed, it is best to sow the seeds as soon as they are ripe in fall. First, to breakdown the hard seed coat, pre-soak the seeds in warm water for 24 hours. Then, scarify the seeds in boiling water or concentrated sulfuric acid for 30 minutes. Next, stratify them in a cold sand bed kept at 41- degrees Fahrenheit for 2 to 3 months. This will meet their cold requirements and get the seeds ready to germinate. Sow the seeds in a greenhouse the next spring in seed trays. Pop out the seedlings as soon as they are large enough and place them in individual 5-inch pots. The young seedlings can be planted outdoors in early fall or held over in an unheated greenhouse till the next spring depending on your zone. Another propagation method is to take softwood cuttings in mid to late summer. Use a rooting hormone and plant them in a light soil medium with plenty of perlite. Once well rooted, transfer them to individual 1-gallon pots.

Pests, Diseases, and Other Problems

Redbuds can be damaged by a few pests such as caterpillars, scales, leaf hoppers, Japanese weevil, and wood borers. But, for the most part redbuds are unaffected by pests.

Just get used to 2 or 3 dead limbs appearing each spring on a mature redbud. It is the nature of the beast. These diseased limbs are caused by the most common problem of the redbud, canker. No chemical preventive has been found. Usually, canker on the branches will not kill the tree. So, prune out the few dead branches in late spring each year and go on with life. Verticillium wilt is another disease that can be troublesome for redbuds as well as many other plant species. During rainy periods, anthracnose leaf spot and coral spot fungus can be difficult, but rarely becomes serious. Also, during wet conditions, root rot can be a problem for young redbuds.

There are a few other minor problems that also affect redbuds. They are sensitive to Glyphosate and other herbicides being sprayed around their roots. They don’t like to have their roots disturbed once established and the amount of volunteer seedling coming near a mature tree can become a maintenance nightmare. But all in all, redbuds are hardy resilient trees that require little maintenance.

The flowers should be harvested in the early morning or late afternoon for the best flavor and shelf life. Hand pick the flowers off the stems or cut off entire branches to pull the flowers from later. Store the blooms refrigerated in a plastic baggie with a wet paper towel for moisture or freeze the flower buds in ice trays. The young tender seed pods should also be carefully hand-picked. The older pods are too tough and stringy to be eaten. Store the unwashed young seed pods frozen or refrigerated in plastic baggies.

The flowers, young leaves, young seed pods, and seeds are all edible. The roots and inner bark can also be used to make herbal tinctures and infusions. The flowers have a sharp, acidic, green peanut flavor before they open and then are blander once fully opened. Flower buds can be pickled and used as a caper substitute. The crunchy raw opened flowers can be added to salads and pasta dishes or used as a garnish. The flowers can also be mixed with pancake batter to make fritters or added into bread dough. The blossoms can also be floated in drinks as decoration. Native American children would eat the blossoms as an early spring treat.

Several Native American tribes and settlers used the inner bark and roots of the redbud to make a cold infusion to quell fevers or to reduce respiratory congestion. An astringent cold drink was also made from the roots and bark to stop vomiting and dysentery. A hot tea was made by boiling the inner bark to treat whooping cough in children and coughs in adults. The redbud flowers are rich in vitamin C and contain anthocyanin which is an antioxidant.

Native Americans held the redbud in high regard because they had so many uses for the tree. The wood was used for tool handles, bows, and as a building material. The outer bark of the tree was used for basket weaving and the inner bark for sewing thread or cordage. Small stems were used as a fire starter in winter. The dried leaves of the tree were used as an incense in ceremonies. The blooms were used as a seasonal indicator harkening the beginning of spring.

With their striking pink-lavender blooms in spring and their handsome heart-shaped summer foliage, redbuds are an excellent choice as a specimen tree, mass planting in a background or as a filler in any landscape. Redbuds also have attractive yellow fall foliage. It is adaptable to partial shade or full sun, is relatively low maintenance, and rarely troubled by pest or disease problems.

There are two species of redbuds native to North America. The Western Redbud (Cercis occidentalis) is found in Arizona, Nevada, and California. It is smaller with a mature height of 18 feet and tends to be more drought tolerant. The Eastern Redbud (Cercis canadensis) has three botanical varieties; var. canadensis (the common form), var. texensis (Texas redbud – a compact tree with smaller glossy leaves), var. mexicana (Mexican redbud – a smaller shrubby form with a rounded leaf).

‘Covey’ – a green-leafed weeping redbud with a 6-foot mature height.

People with peanut allergies should avoid eating redbud flower buds and bean pods since redbuds and peanuts are close relatives in the legume family.

The Eastern Redbud is a readily available tree for foraging and an exceptional ornamental landscape plant. These trees are low maintenance and easy to grow. The redbud would make an outstanding addition to any home landscape.