I was not aware of the mayhaw’s existence until I started working for a nursery in Louisiana about 20 years ago. After a dinner party, a co-worker’s wife gave me my first mason jar of delicious mayhaw jelly and I’ve been a fan ever since. The people of Louisiana are so serious about their love of mayhaw jelly that they made it the state jelly by proclamation. They have also set up a special organization, the Louisiana Mayhaw Association, just to promote the production and consumption of mayhaw berries. There are even festivals celebrating the time of year when mayhaws are fruiting, and isn’t that just like the good people of Louisiana, they never turn down any reason to celebrate.

The mayhaw is a member of the Hawthorn family. It grows as a medium-sized deciduous tree or large shrub. It can reach 25 to 30 feet in height and spread after 20 years. Hawthorns are relatively long lived with some specimens living over 400 years. The mayhaw can have a productive fruiting life of over 50 years.

The leaves are 2 inches in length with a coarse texture. Leaves are deeply toothed and ovate or elliptical in shape. They are narrower at the tip and broader towards the base. Foliage turns bright yellow in the fall. Both the leaves and branches are held alternately. Branches can have 1- to 3-inch thorns. The pinkish-white, cup-shaped flowers appear in late February to March and have 5 petals with 15 to 20 pink stamens. They are held in flat bottomed clusters 2- to 3-inches wide. Younger flowers have a fresh sweet scent, while older blooms smell like rotten fish to some people. The fruit are small, ½- to 1-inch pomes. Pome fruit are structured like pears and apples with a group of seeds in the center. Mayhaw berries are juicy and quite tart. The fruit look like small crabapples but taste more like a cranberry. Fruit are glossy red to yellow with white to yellow flesh and ripen in May thus the name, May hawthorn or mayhaw. 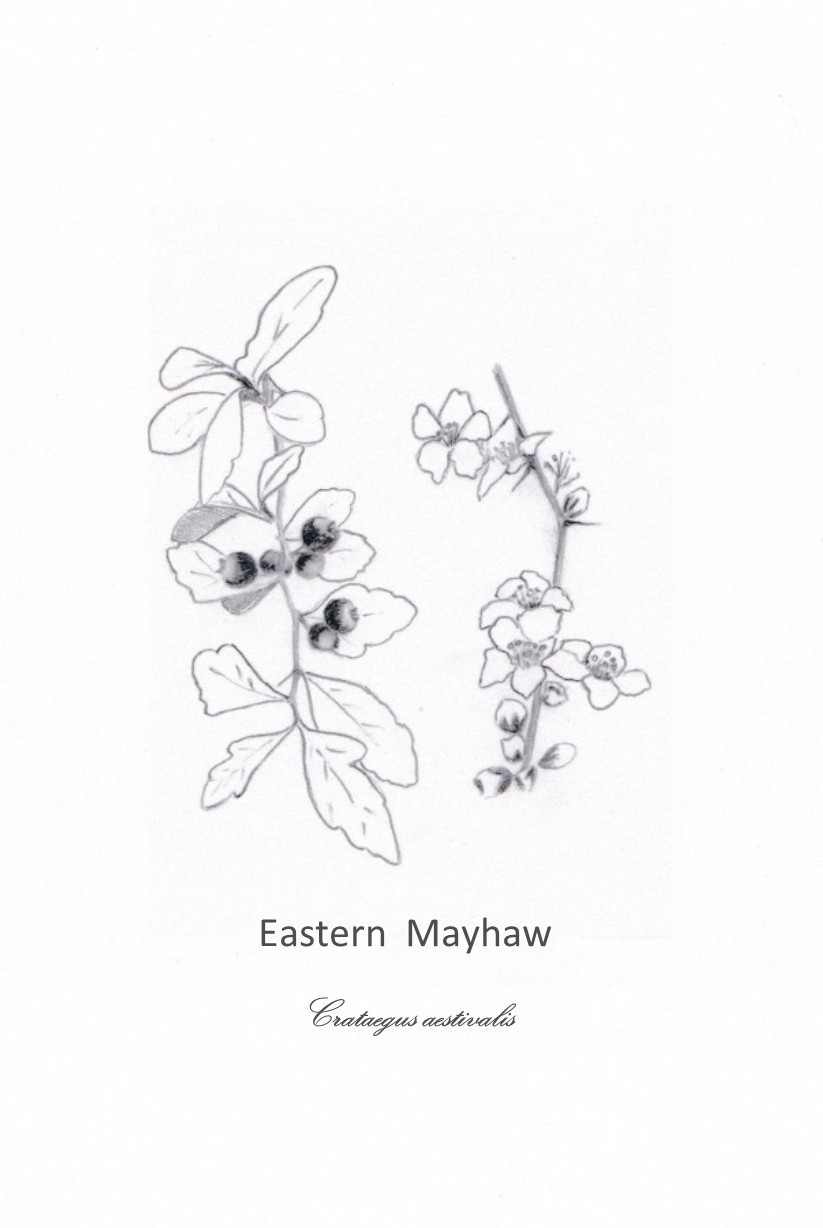 Mayhaws grow along bodies of water, swamps, lowlands, in flood plains, and uplands. They range in zones 6 to 11 from Texas all the way around the Deep South up through the Carolinas and on into Virginia. Mayhaws are regularly cold hardy down to 15-degrees Fahrenheit and have survived temperatures down to -25-degrees Fahrenheit. They prefer 8 hours per day of full sun, but will tolerate moderate shade, although this can limit their fruit production. If the soil is well drained, mayhaws can tolerate soils too moist for most other fruit trees. They can adapt to a wide variety of soil pH levels and soil profiles but prefer a slightly acid, loamy, moisture-retentive soil with a pH of 6.0 to 6.5.

Mayhaw trees are low maintenance plants, but water them weekly during dry periods their first year while getting established. They will be somewhat drought tolerant in ensuing years. But, it is best to avoid drought stress since this can affect their growth rate and fruit yields, as well as making them more susceptible to diseases and insects.

In a home orchard setting, mayhaws need little training other than initially pruning them up into a single trunk and removing the branches lower than 4 or 5 feet for easier access when harvesting. In ensuing years, simple prune them annually in late winter to open the canopy to ensure better fruit production. Also, periodically trim the suckers that pop up at the base of the trunks and clean up weeds, as well as debris underneath your trees. Space your trees 15 to 20 feet apart in rows with 18 to 20 feet between rows when planning an orchard.

Plant at least two trees for maximum fruit production since cross-pollination is necessary. Flies and midges are drawn to the extremely sweet scent of the blooms and are responsible for pollination of most mayhaws.

These trees can be propagated by seed, softwood cuttings, hardwood cuttings, and root cuttings. Unlike most other fruit trees, mayhaws usually grow true to variety from seed. So, seed are the most common choice of commercial growers. Since 12 to 18 weeks of cold treatment (stratification) are needed for germination, seeds should be planted in refrigerated moist sand or direct field planted in the fall.

The next best form of propagating mayhaws is softwood stem cuttings.  With an application of rooting hormone, softwood cuttings can easily be rooted under mist or in a sweat tent. Although, hardwood and root cuttings can be done, they are not preferred because they are slow to root-out. Cleft or whip grafts are employed when propagating newer cultivars or larger trees. Mayhaws can be used as a rootstock for any other hawthorn, especially when planting in a wet location.

Use an all-purpose fruit tree spray containing fungicide, insecticide, and miticide in early spring once insects and diseases become active. If using your trees solely for fruit production, then use natural pesticides like insecticidal soap and pyrethrins. Spray a streptomycin product if fire blight becomes a problem in late spring or early summer. If the fire blight symptoms continue, prune out any infected limbs and burn them. During the winter, spray a light horticultural oil to control scale and other insects. Don’t spray horticultural oil during the growing season after the leaf and flower buds have started to swell otherwise you can do damage to your tree.

Mayhaws ripen in late April or May and should be allowed to ripen fully on the tree before harvesting. The mayhaws can be harvested by hand. But, the easiest method is to wait until at least 80% of the fruit are ripe, and then place a tarp, an old sheet, or a parachute under the tree and vigorously shake the tree. Gather the cloth from under the tree and roll the fruit into a basket or bowl. Since the rainy late spring is harvest time, boats or canoes may be necessary to harvest fruit grown in flood plains or near rivers. The fruit can be skimmed off the water’s surface with a pool net if this is the case. The fruit is not considered to be good for fresh eating, but is usually processed soon after harvest into jelly or juices. If there isn’t time to process the fruit immediately after harvest, the fruit can be stored refrigerated in an air-tight container, dried, frozen, or kept as a juice for months. Yields can vary widely depending on the variety, age, and size of the tree. A 20-year old tree can yield as much as 15 to 30 gallons of fruit per year.

The mayhaw is best known for its jelly, a southern delicacy, which is said to be the best in the world. Although, not exceedingly popular for fresh eating because of their bland to tart flavor. There are many other ways that mayhaws can be utilized such as flavoring alcoholic beverages like wines, beers, brandies and, that southern favorite, moonshine. They can also be baked in pastries or made into sauces, vinegars, mayhaw butter, fruit leather, syrups, and juices. The Native Americans dried and pressed them into small cakes with other berries like juneberries.

Hawthorn berries and mayhaws have long been recognized for their ability to regulate blood pressure by dilating blood vessels, reduce angina pains, improve circulation, and prevent atherosclerosis by reducing plaques caused by the build-up of cholesterol. They are a good source for the vitamins C, B-complex, choline, inositol, PABA, vitexin, catechins, flavonoids, bioflavonoids, and saponins. They are also rich in various anthocyanins which can act as antioxidants to ward-off the damage from free radicals. These berries can also be used to treat intestinal infections, improve the immune system in general, and increases stamina. A tea can be made with the berries. Drinking the tea twice a day is said to promote heart health.

The mayhaw is not only a much-loved, native fruit tree, it can also be used as an ornamental, an erosion control plant, a butterfly attractor, a wildlife habitat, and as a windbreak. They make exceptional landscape ornamentals or edible landscape plants with their striking flowers, attractive foliage, and colorful fruit. They are good erosion control plants because their fibrous root systems can assist in stabilizing hillsides and river banks. Bees and butterflies are both attracted by the strong fragrance of their flowers. The mayhaw is a good shelter and food source for birds, as well as other wildlife. Hawthorns have been used as windbreaks for hundreds of years because of their dense branching and foliage. Native Americans and settlers used their long thorns as wooden needles to sew and make repairs to nets. Thorns were scorched, scrapped clean and then covered with beeswax to protect them. Once processed, these needles were strong enough to go through the thickest leather or even a metal can. This species strong, heavy wood makes durable handles for hammers and other hand tools. These trees can flourish in areas where other trees can’t live since they are flood tolerant, pollution tolerant and when well established, drought tolerant. Seedling mayhaws make an excellent rootstock for any other hawthorn variety.

It is likely that the seeds and leaves are toxic if consumed in large quantities, both contain amygdalin, a precursor to hydrogen cyanide. It can cause side effects such as dizziness, shortness of breath, nausea, and arrhythmia. Also, avoid the 1- to 3-inch long needle-like thorns on the branches.

A lot of progress has been made since people started bringing mayhaws up out of the swamps and put into cultivation about 30 years ago. Over the last few decades, great improvements in breeding for fruit size, fruit quality, cold-tolerance, yield, disease resistance, and harvest time have been made. Although named cultivars are still hard to find anywhere other than in commercial orchards, native mayhaws are starting to be carried in garden centers across the Southeast. With a boost from mayhaw-centric organizations like the Louisiana Mayhaw Association and the popular interest in edible native plants, the mayhaw may well become the only hawthorn species to ever become commercially successful.