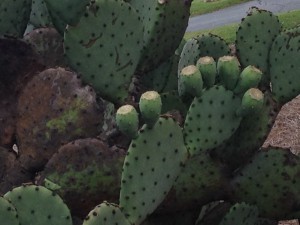 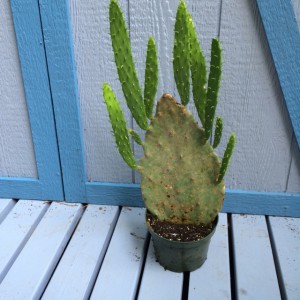 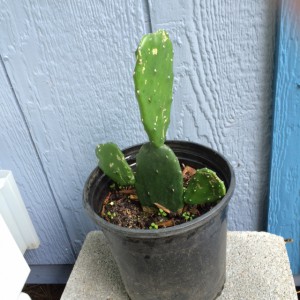 Although these plants look like living barbed wire and seem to scream “don’t touch”, they have been used in a multitude of ways for thousands of years. The stems, flowers, fruit, seeds, and sap of the prickly pear cactus have been used as foods, medicines and even tools.

These thicket forming cacti are native to all the Americas and range from British Columbia south to California and, in the East, from New England to Florida on southward to Mexico and South America. They have also been introduced to other parts of the globe from the Outback of Australia to the lava beds of Sicily. These small-to medium-sized evergreen shrubs prefer rocky, dry, well-aerated sandy soils with a pH of 5.5 to 7 and occur mainly in warm arid conditions but can adapt in many other climates (zones 3 to 11), soil types, and moisture levels.

Prickly pear cactus has done away with normal leaves in order to retain water. They have managed this by evolving highly modified flattened stem sections into pads or phylloclades and leaves into large spines, as well as smaller fuzzy tufts called glochids. The plants vary in height from 1 to 7 feet and spread as wide as 8 feet. In general, the thick paddle-shaped, green to blue-green pads range from 4 inches to 11 inches in length and as wide as 9 inches. The 3-1/2 inch bowl-shaped flowers are red or yellow fading to orange and appear on the upper tier of pads in early summer (May to July). Each flower yields a barrel-shaped cactus pear, covered in scattered tufts of glochides, that varies in size from 1 to 3 inches by ¾ to 1 inch across and are dull red to purple. The thin-skinned fruit is filled with red juicy pulp with many flat circular seeds.

The Indian Fig (Opuntia ficus-indica) is the most used culinary variety, but many other; are also edible. The young tender pads have an acidic, sweet citrus-like flavor.  They can be harvested in spring to make a mild mucilaginous vegetable when stewed like okra, cut onto strips and used like green beans in salads, or the whole pad can be fried like a steak. The pads may also be boiled, roasted, broiled, stir-fried, deep-fried, or pickled.

To harvest the pads or nopales, as they are known in the southwest, you need to employ thick leather work gloves, tongs or cardboard strips, and a sharp knife. The thorns and hair-like glochides have to be removed by burning them off with a torch or by rubbing them off with a damp towel. Otherwise, these bristles can cause strong skin or digestive irritation.

The cactus pear (or tuna in Spanish) can be harvested in a similar way to picking the pads.  Prepare the fruit by cutting off each end and then making a quarter inch length-wise slit. Then, run your thumb into the slit and peel off the thick rind. The red to yellow pulp can be used to make juices, syrups, sauces, teas, candies, pickles, and preserves. It has a sweet flavor that is a cross between watermelon, blackberry, and bubble gum. The fermented juice is also used to make a Mexican alcoholic beverage called colonche. The many black seeds in each fruit can be dried and ground into flour or used as a soup thickener.

Not only are these plants a good food source, they are very nutritious with high levels of amino acids, magnesium, iron, calcium, selenium, antioxidants, beta carotene, fiber, as well as vitamins B and C. Prickly pear cactus have been used as a traditional Mexican remedy for type 2 diabetes since they can lower blood sugar. They can be used to treat ulcers, colitis, sunburn and insect bites since they possess the ability to reduce swelling.  These plants may also be beneficial in fighting viral infections, decreasing cholesterol levels, preventing hangovers, and as a hair care product.

These versatile plants also have other surprising uses such as fodder for cattle, as a dispersant of oil spills, making earthen plaster, and as an additive in candle making.  As a landscape plant, they can be used as an evergreen screen or a security wall. In a survival situation the pads can be used as a makeshift canteen and the spines can be used to make needles and fish hooks.

The self-fertile prickly pear cactus can be propagated from seed, but the easiest method is to plant single stem sections or pads. Simply cut off a pad and let it callus in a warm dry place for several days. Plant the cutting by burying one-third of the lower end of the pad in a 1- or 2- gallon pot. Use a cactus soil mix or a commercial potting soil with perlite added for good drainage. Place stones around the base of the pad to hold it upright. Place the young plant in a sunny location, but out of hot direct sun. During the summer, rooting will occur in 5 to 10 days, but during the winter it may take up to 3 months. The new cutting won’t need to be transplanted for up to a year. When ultimately planting your young cactus, give it plenty of space to grow in a sunny location.

These extremely hardy plants are seldom affected by pest or disease problems. But, they may be troubled by mealy bugs, slugs, and snails. Rarely, these cacti can contract maladies such as anthracnose, sun scald, and various rots. But, all in all, they are tough, long-lived, highly useful plants.