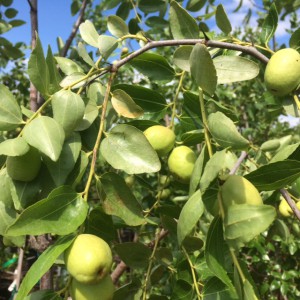 Green fruit in a ‘Li’ Jujube 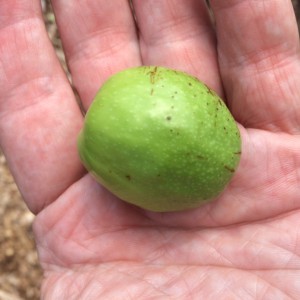 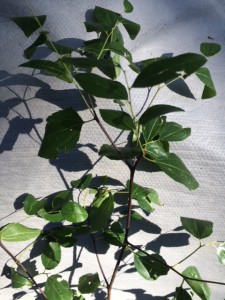 A branch of a ‘Sugar Cane’ Jujube 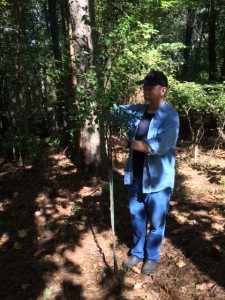 Jujube (Zizyphus jujube), a native to east India, was brought to China and domesticated over 4,000 years ago and it was first carried to America in 1837.  Today it is cultivated around the world from China to the Middle East on to North and South America. It is a very long lived member of the Rhamnaceae or Buckhorn family. There are productive trees in China that are over 1,000 years old. It has several common names such as Chinese Date and Red Date, it got these names because once the fruit starts to dry and wrinkle it resembles a date.

The jujube is a small deciduous shrubby tree with an upright trunk and short angled drooping branches that grow in a zig-zag pattern. They grow to a mature height of 20 to 40 feet tall and 10 to 15 feet wide. Their small ovate leaves are shiny, waxy, dark green on top and fuzzy on the lower side. Each 1 to 2 inch finely toothed leaf has three prominent veins and two thorns at the base. The tiny 1/5th inch greenish-yellow blooms appear in clusters late April to early May.

The fruit of older common varieties are as small as ½ inch whereas the newer improved varieties are as large as 2 inches in diameter. Fruit are shiny and resemble a miniature reddish-brown apple when ripe. The fruit ripen in three stages, maturing in July and August.  First, they turn light green then yellow-green, and mature into a reddish-brown color when they start to wrinkle. Also, the fruit have a crisp sweet semi-acidic pulp similar to an apple. Each fruit has a single hard stone with two seeds inside.

The jujube is well adapted to virtually all soil types from sandy and clay soils to even rocky soils, but they prefer a well-drained loamy soil. Also, these trees will withstand a wide range of soil pH, but can exhibit nutrient deficiencies at an extremely alkaline pH above 7.8. Jujubes can also grow in soils with high salinity. These trees are very tough and will survive in soils where other trees would perish.

The mature jujube tree can tolerate a wide range of temperatures (Zone 5-9); winter temperatures as low as -28 degrees F without any ill effects and no summer temperature seems to be too high. They also endure drought, and excess moisture better than most other trees. However, the jujube is best adapted to arid climates since they prefer it hot and dry. Once established, they can survive on as little as 8 inches of rainfall per year, but for good fruit production, they need 20 inches or more of rain. One thing they don’t cope with well is deep shade.

Many growers consider jujubes to be one of the easiest and most resilient trees to grow. They are also early to bear fruit, sometimes in the first year but usually set a good crop by the third season. These durable trees seem to do well with little or no fertilization. If they do need a little nitrogen, a good composting once in early spring is adequate. In a commercial orchard setting, a light broadcast application of a balanced fertilizer like an 8-8-8 or 10-10-10 NPK every third month during the growing season is beneficial. However, don’t fertilize newly planted trees until they have had several months to establish.

Jujubes don’t necessarily need to be pruned to produce well, but extensive winter pruning can form a more compact tree with fruit that is easier to reach. Pruning may also need to be done to remove broken or dead limbs and suckers that come up at the base of the tree.

Most cultivars being grown in the U.S. are grafted or budded on to a common hardy rootstock. Jujubes may also be propagated by seed, although they do not breed true to variety. The seeds must be scarified by rubbing them on sandpaper and then soaking them in warm water overnight to prepare them for planting in small peat pots. The next step is to give the seeds a three month moist chilling period either by keeping them in a refrigerator or by letting them over-winter outdoors. Once the seedlings are up and well rooted, move them to a one gallon pot. After a year, transplant them to a three gallon pot and then after another year plant them in the ground.

Jujubes have no serious disease, insect or nematode problems in North America, hence they don’t require spraying and can be easily grown organically. The only disease problem is witches broom virus, which is isolated in China and Korea. Animal pests such as deer, which eat the fruit, and gophers that eat the roots can be a minor problem. Also, birds sometimes peck the fruit.

The fruit crop doesn’t ripen all at once and can be picked for several weeks from the same tree. Green fruit will not continue to ripen if picked from the tree. Fully ripened fruit can be stored for up to a week at room temperature. If allowed to dry while on the tree, the fruit will store indefinitely even without use of a sulfur preservative. Although, there is a wide variety of ways to prepare jujube fruit such as smoked, pickled, candied, preserved in honey syrups, in jams and in soups or sauces; most cultures prefer to eat the fruit dried.

There are over 700 recognized varieties of jujubes in China and about 40 varieties that have been introduced in the United States. Most cultivars are best consumed either dried or fresh. ‘Chico’ and ‘Li’ are two varieties that are multi-purposed and are good eaten both fresh and dried. ‘Li’ is the most recommended as a first tree for beginners. ‘Lang’ and ‘Shanxi Li’ are best eaten dried. ‘Lang’ is the most widely grown cultivar in orchards and a heavy producer while ‘Shanxi Li’ has the largest fruit. ‘Sugar Cane’, ‘Honey Jar’ and ‘Sherwood’ are cultivars that are best for fresh eating. All three of these varieties are especially sweet.

Jujubes are rich in vitamins B1, B2, B3, B6, A and C. They also have minerals such as iron, calcium, phosphorus, potassium and potassium. Because of all these vitamins and minerals this fruit has numerous health benefits including fortifying the immune system, lessening skin irritations, wound healing properties, stress relief, as a sleep aid, and as a treatment for sore throat.