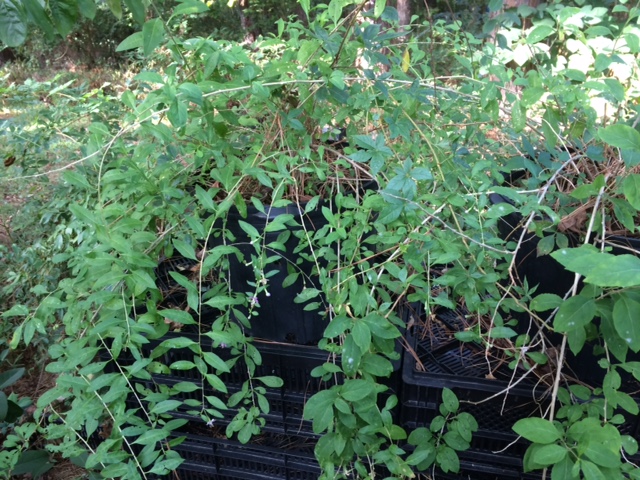 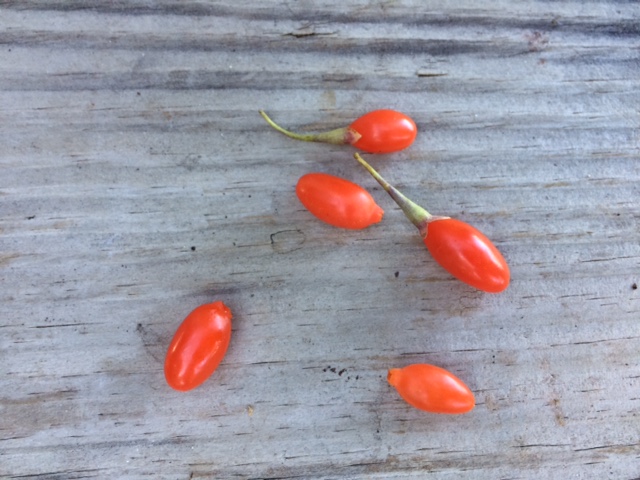 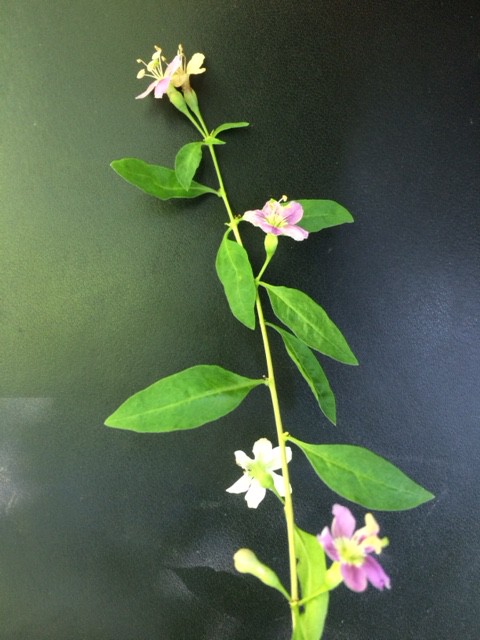 Goji berries have come to prominence in the last few years as a superfood and are appearing in different forms in stores across the country. They are native to the lush hillsides of Mongolia, China and Tibet. The fruit and leaves of these plants have been used in the traditional medicine of China, Japan and Korea for thousands of years, but are just being discovered in the United States. Goji berries were first brought to North America by Chinese railroad workers who were building the transcontinental railroad in the late 1800s. Gojis go by numerous common names such as wolfberry, Chinese boxthorn, and Lycii berry. There is some botanical confusion on varieties but most of the plants and berries we see here are Lycium barbarum. There are two other varieties, Lycium chinense and Lycium halimifolium that are also grown to a much lesser extent.

These woody deciduous shrubs are members of the Solanaceae or Nightshade family along with tomatoes, peppers, eggplants and tobacco. When left on their own, they will grow into large trailing mounds as large as 9-feet tall and wide. The long spindly thorny branches are full of small lanceolate leaves arranged in an alternate pattern when they are young. Their leaves will become more elliptic as the plant ages. The small, light purple, bell-shaped flowers appear in late summer and early fall. The elongated, pear-shaped to oval red berries are about ¼ inch in diameter and ½ inch long. The slightly sweet fruit are produced in waves throughout the fall and are filled with 10 to 60, small, yellow seeds similar to tomato seeds. Their roots grow deep and are fibrous.

Most references state that gojis prefer full sun, but my experience is different. They like afternoon shade especially in July and August in the Southeastern United States. The fruit production may be diminished slightly, but the plants are much less stressed when planted in a spot that has some afternoon shade. Try to plant them on the south or southwest side of the house so they can get at least 6 hours of sun in order to fruit. Gojis prefer a slightly alkaline, well-drained, sandy loam soil that has been amended with organic compost with a pH of 6.8 to 8.1. These plants can be grown in USDA Zones 2 to 9. They are very adaptable plants that are hardy down to -15-degrees Fahrenheit and tolerant of temperatures up to 100-degrees Fahrenheit. The plants are drought tolerant and don’t require much irrigation after being well established.

In my experience, these plants are difficult to grow. This is another point on which I disagree with most gardening references. It has taken me four years and the loss of several plants to start to understand how to grow them. The goji berry likes a well-drained, high-alkaline soil. If you are growing your plants in a container, use a soil mix with 1/3 sand and 2/3 peat moss-based soil mix. Add some pelletized lime to raise the pH so it is more alkaline. For the best results, do a soil test through your state’s extension service.

Supposedly, gojis prefer full sun, but I have found they do best where they can have 40 to 60% afternoon shade. These plants are accustomed to growing on steep hillsides. So, if you are growing your goji berries in containers, raise them up 5 to 6 feet on a stack of bulb crates or on a stake of pallets. If you prefer to plant them in the garden, you will need to support them against a structure, on a trellis or plant them along the top of a high wall so they can drape down the wall. Space your plants 20 to 36 inches apart. Goji plants prefer low nitrogen organic fertilizers like fish emulsion or plant tonics like Superthrive. They do not like high nitrogen fertilizers. Keep your plants evenly moist, but not overly wet. Apply 1 to 2 inches of mulch to Goji berries planted in the ground to aid with water retention.

There is much that can be learned from how commercial nurseries prune and train their goji berry plants. In commercial goji berry nurseries, after the first year a primary shoot is selected to be the central leader. This central leader is supported on bamboo stakes and wire trellises. All the other lower lateral branches are pruned off to 15 inches from the ground. The soil is mounded up 3 to 4 inches around the central leader in order to develop a broader more stable root system. When the plants reach 24 inches in height, pinch out the growing tips to encourage side branching and fullness. The fruit will be born on these side branches. After the plants become well established, prune them regularly to maintain their desired height and continue to remove any branches or suckers forming lower than 15 inches from the ground. Also, prune out unproductive branches and thin out some of the branches after the fruiting season.

Goji berries are self-fertile so they don’t necessarily need a pollinator but may be cross pollinated by insects. They can be propagated by seed, rooted cuttings or bare root cuttings, and by harvesting suckers that come up near the older plants. Planting seeds is the easiest form of propagation. But, due to seedlings extreme genetic variability of growth rate, fruit production and winter damage susceptibility it is not the most viable propagation method. Growing them by cuttings is a far better choice.

In late spring or early summer, choose thick, 10-to 18-inch long, softwood cuttings and strip the leaves three-quarters way up the cutting. Plant them 4-to 6-inches deep in small, 4-or 5-inch pots filled with a good potting soil mix. Dip the cuttings in a rooting hormone before sticking them. During the winter, hardwood cutting may be taken. Rooting should take place in 2 to 3 weeks during the warmer time of the year and 4 to 6 weeks during the winter months. Once the cuttings are rooted, they can be fertilized with a low-nitrogen organic fertilizer. Depending on the time of year, the rooted cuttings can be slowly acclimated to the outdoors and then transplanted into a larger container that is at least 18 inches in diameter or planted in the garden.

If you chose to plant seeds, they can be harvested from dried fruit or bought online. It is relatively easy to grow goji berry plants from seeds. Plant 2 to 3 seeds ¼-inch deep in a 3” peat pot filled with a good seed-starter soil mix 6 to 8 weeks prior to the last frost date in spring. Mist them well and seal the pots in a large plastic baggie to maintain soil moisture. Remove the plastic baggie once the seeds germinate.  It usually takes 7 to 14 days for germination. Keep them consistently moist, in good light, and at 60 to 70 degrees Fahrenheit. This will prevent the seedlings from becoming leggy.

Goji berries are not usually affected by many pest or disease problems. But, pests of the goji can include thrips, aphids, spider mites, Japanese beetles, leafhoppers, scale and whiteflies. Possible diseases are many of the same ones that attack tomatoes. The diseases that can affect include early blight, blossom end rot, and powdery mildew. In my experience, Aphids and powdery mildew have been the worst problems in recent years but, birds are by far the greatest threat to your berry harvest. So, bird netting is recommended.

Plants bloom from June through September and the berries mature during mid-summer through October. Harvesting is done completely by hand since the berries are so easily bruised and will leak juice when damaged. The berries are usually dried or made into juice.

The semi-sweet tasting fruit of the goji have a flavor similar to tomatoes. They can be eaten fresh or dried and also made into jams or jellies. The berries can also be added to stews, soups, pork dishes, chicken dishes and vegetable dishes. The slightly bitter-tasting leaves can be used to make chicken soup and anti-oxidant rich teas or other beverages.

Goji berries are one of the most nutrient-dense plants. The fruit contains 500 times more vitamin C by weight than oranges and more beta-carotene than carrots. The dried leaves are higher in vitamin E than kale and have twice the folic acid as wheat bran. The plants contain many other nutrients including 18 amino acids, 11 essential minerals, 21 trace minerals, 5 other vitamins, proteins, and 5 fatty acids. Phytochemicals such as zeaxanthin, beta-cryptoxanthin, xanthophyll, and many polysaccharides are also present in goji berry fruit. Several other beneficial compounds have been discovered in the fruit such as the anti-cancer agent selenium and the anti-fungal/anti-bacterial agent solaveitvone.

Although only a few medical studies have been done on the health benefits of these plants, the many health benefits of goji berries are thought to include anti-oxidants that scavenge free radicals, compounds that improve eyesight, cardio-protective compounds, cholesterol lowering properties, control of diabetes, bolstering the immune system, protection of the skin from UV radiation and possibly anti-cancer activity.

People that are allergic to plants in the Nightshade family should be cautious when consuming goji berries. Also, goji berries could interfere or interact with some pharmaceuticals such as blood thinners like warfarin, blood pressure medicine, and diabetes medications.

The majority of goji berry fruit and leaves are still produced in China, but this nutrient-rich plant is now being grown commercially in Utah, California, Oregon, and Pennsylvania. Many new Goji products have recently appeared in stores such as chocolate-covered goji berries, granola bars with goji berry pieces, Goji-leaf tea, and goji berry-flavored yogurt. Over the next ten years, we should see the goji berry become a well-known superfruit produced in America.