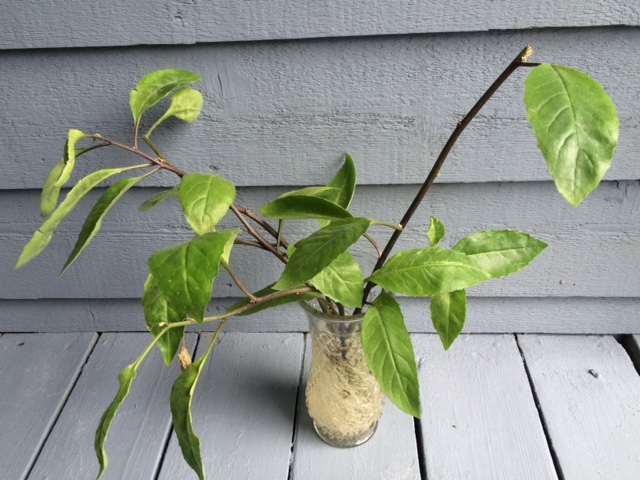 A fellow plant collector in LaGrange, Georgia, gave me a small Gynura procumbens plant that his friend from the Philippines had given him.  After a little research, I found that this unique herbaceous plant has so many uses and benefits that it’s surprising that it doesn’t wash and wax your car, too.  Considering its extensive medicinal value, I am embarrassed to say that I knew nothing about it.

It’s not exactly clear if this member of the sunflower family, Asteraceae, originated in West Africa or in Southeast Asia. It has been passed around the world so many times. Gynura procumbens is especially widely consumed in Thailand, Indonesia, Malaysia, and the Philippines. It is known by several different common names. In Thai it is called longevity spinach and in Chinese it called “pointed phoenix tail”. Other names are sabungai, cholesterol spinach and leaves of the gods.

Gynura procumbens is a tropical evergreen vegetable. If left to its own natural form, it will grow as a scrambling vine about 2 feet tall with floppy stems stretching out to 18- to 20-feet long.  It can also be maintained as a small bush in a container if given regular pruning and support.

Longevity spinach grows best in partial shade but will tolerate full sun if given regular irrigation. It is only cold hardy in Zone 9 to 11, so protect it from freezing during the winter months. It will take a light frost, but it is best to keep it indoors or in a greenhouse when temperatures dip below 40-degrees F. The plant’s growth slows to a crawl during the winter months and when it is in its blooming cycle in spring. Then, its prolific growth accelerates again during the warm summer months. Gynura procumbens prefers moist fertile soil and doesn’t perform well during times of drought.

When a pH of 6.5 is maintained, frequent fertilization is not necessary. A light application 3 to 4 times a year with a 20-10-10 or 20-0-0 N-P-K analysis liquid fertilizer is adequate. Bone meal (4-12-0) is a good, inexpensive, slow release, organic fertilizer to use in addition to the liquid fertilizer.

If you are going to maintain this prolific plant as a small shrub, it will require monthly pruning. Trimming plants only forces them to grow faster.  It should be sheared back to a conical form and the clippings can be consumed or placed in water in order to propagate more plants. The plant seems to take well to being supported by a bamboo teepee or espaliered on a wooden trellis.

Pollination is not important since no viable seeds are produced by the flowers. Propagation is best accomplished asexually by cuttings. Each cutting should be 10- to 18-inches long and placed in a vase of filtered water. The cutting will root in 10 to14 days at 65 to 75 degrees. Then, the rooted cuttings can be potted into a general potting mix and kept moist for the next 10 days until they get established.

This tough plant seldom has pest problems, but aphids and spider mites can be a minor nuisance.  A strong spray of water can usually wash off most of these pests. Repeat the rinsing if the pests return. If these pests continue to persist, try using insecticidal soap or neem oil-based pesticide.

This plant is so prolific that during spring and summer it doesn’t miss losing 3 to 6 leaves per day. The leaves will keep refrigerated in a plastic baggie for up to 10 days. The leaves can also be shredded in a blender and frozen for consumption later.

The leaves should be eaten raw for the best medicinal effects. It also has many other culinary uses. It may be substituted for lettuce in a sandwich and it is excellent as a crunchy salad green, too. It can be eaten steamed, used in stir-fries, or chopped up in stews or soups just like regular spinach. The stems can also be sliced up and used like celery.

This sprawling, leafy plant has been used in Asian folk medicine for centuries. There are numerous health benefits attributed to Gynura procumbens, but the most profound ones are its ability to lower blood pressure and its ability to lower blood sugar levels for diabetics. Longevity spinach’s anti-hypertensive properties may revolve around its capacity to increase nitric oxide, a vasodilator, in blood vessels. Scientific research has shown that both type 2 and type 1 diabetics benefit from the plant’s ability to reduce blood glucose levels. This plant, also, has an anti-hyperlipidemic effect which lowers cholesterol and triglycerides as it protects the body from heart and liver disease. Bioactive steroids and alkaloids in Gynua procumbens have shown promise as anti-inflammatory agents in scientific studies. Other medical research has indicated that this plant may enhance the body’s healing capabilities. Also, it may have anti-fungal, anti-cancer, and anti-viral properties, as well as, being able to scavenge free radicals.

There is a purple-stemmed unnamed cultivar of Gynura procumbens in addition to the common green variety. Okinawa spinach (Gynura crepiodes) and purple passion vine (Gynura auranbaca) the house plant are both in the same genus with longevity spinach.

I can personally attest for this plant’s ability to adjust ones blood pressure. I had slightly elevated blood pressure until I started eating 3 raw leaves per day. Now, after several months, my blood pressure is nearly text book for my age and the lowest among any of my co-workers. I don’t have personal experience with the plant assisting leveling off blood sugar, but medical research points in that direction.